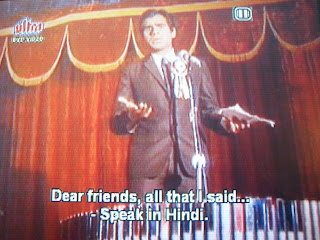 A true phenomenon, as I notice in all my favorite 60's and 70's movie, the use of English dialogues is very integrated into insults and climax scenes. So I wrote a list of my favorite English speakers from most eloquent to most clap-worthy. English is always used in a 1970's climax scenes with the use of BAAAAASSSTTAAAARRRD, and many angry words.
1. ELOQUENT - Raaj Kumar, his voice I could listen to all day long, with his laconic delivery , his wonderful English dialogues I found were in Waqt and Ittefaq both directed by Yash Chopra. He uttered his dialogues with a hint of bourgeoisie smugness in Ittefaq as he greets his old wife and new pathi Sunil Dutt. In Waqt his majorly English dialogues were when he asked Shashikala for a dance, "May I have this daaance your Highness" kaaaash i was his Highness, his sarcastic dialogues in this movie were so sly with that lovely voice of his!

2. PLEASANT - THE SHASHINATOR, he has such a lovely voice when he speaks in English, with his lovely squeaky delivery in Aag, to his cherubic happiness in Kabhi Kabhi. In that movie his English dialogues were said in that very frenetic shashi way, with his stammering sceeching and all. In Pakhandi with Sanjeev Kumar, he calmed down and spoke his English loudly and screamed his BAASSTARD without any croaks, but in a very pleasant way. In the Householder by Merchant-Ivory, his delivery was sooo sweet coupled with the fact he looked so cute in his kurta pajame.

3. ANGRY - Amitabh Bachan, of course he's here. His English is sooo beautiful, his interview on Charlie Rose a few years ago was soo rich and lovely. My favorite dialogues of his was Lal Baadshah which i saw when i was a wee 9 years old, "How can you do this, she is maa and I have got my strength from her milk' I had to control my laughing as he actually said this resoundingly loud, that even the villain Shreeram Lagoo looked shocked. Another angry utterance was in Mrityudaata when he screeched at Shilpa Shetty (in his slow decline of films of the 90's) "I love you and dammit you will marry me!" this was a very angry utterance as he got a bit dribbly with that one. His lovely restrained dialogue was in Viruudh when he hissed at Tom Alter

4. INFORMATIVE - Iftikar, could't forget the eternal policeman, doctor, father, scientist could i? He always informs the heroes of their plans in his police schemes, he was also in many Amitabh slow decline movies such as his awful comeback in Mrityudaata, he said his dialogues so concisely that even Amitabh leaned in to him, obviously he understood the info!

5 - PUNJABI BRILLIANCE - Dharamendra, my mum's favorite actor, and what's not to love about this homegrown Jatt? He is soooooooo wicked with his words. And in the many Punjabi backwass movies he was in, that i was brainwashed with he rocked. He shouted out his BAAASSSTTAAAAARD so well, that in the cinema i went to in India, everyone stood up applauding. My fave words of his are in the animal exploitation flick MAA, his utterance of "UNCLE king, how you" I believe the 'how r u' got lost in his shouting. His many utterances in that movie is worth one watch which features "It's only the circus MAA' 'Nimmi you vant a bee-re (a bear) '

6. EDUCATIONARY - I made that word up, but another Jatt Punjabi that I Love with all my dil is MANOJ KUMAR. He spoke a lot of English in Purab aur Pachhim, naturally because he is in London. But in one sub-pot he translates Om Prakash's dialogues to the English woman, his voice is full of nuance and pathos. Its deep, he spaces out his words a bit, almost to the point where someone could break in as seen CLERK, this was his most fascist picture ever, a sort "Foreigners are bad, kill them all, bourgeoisie are bad, INdians unit" kinda movie
MANOJ : You don't realize (pause for 2 minutes)
Man: (In Hindi) realize what saab?
MANOJ: (ENGLISH) REALIZE THAT DEY ARE LOOTING OUR (PAUSE)
Man: (Hindi) I know, they steal -
MANOJ: (RAISES FIST) LOOTING OUR ARTIFACTS AND VOMEN (Women)
'Nuff said.

7. CLAP WORTHY - After much thinking, JEEVAN, I LOVE him, his wicked english dialogues in Amar Akbar Anthony were just priceless, his delivery in his already anglicized tone with up and down words made me laugh and clap in unison! When he also played his frightened brother Albert, and "LEAVE ME ALONE" that put me in splits, it probably wasn't intended, but alas his voice is like listening to violins! His funny dialogues in Coolie is why everyone needs to watch that movie, also for the famous scene where Amitabh got his intestines kicked in by Puneet Issar and a table, that sent the whole country into sadness, Jeevan apparently got sooo sad he sold his car to charity to hope the Big B would be saved.