These days since being back at school, I've had less time to see movies, but one day a movie comes along that you just need to see, and DBH is one of them! I've ventured a couple of times to the Indian cinema right on the outskirts of Vancouver. Valiantly I trek to see these movies, and most of the time I am dissapointed with Rab Ne Bana Di Jodi, or Welcome or too affected by the really swingy chairs that were newly installed!
But this summer I was very impressed by the movies that came out and the ones I bought from my Auntydvd-wallah whose shop is conveniently is two streets away from my college!
Anyway onto the reviews! 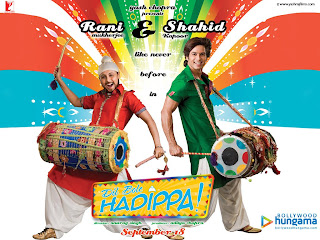 Dil Bole Hadippa - there's something that all these new actresses are missing, which is the general all roundedness in comedy/dance/dressup/drama, all the things that Rani Mukherjee is! And the critics that i usually listen to and scoff at, won't like this film because its full on masala. From the dressup which seems to be very common in the new Yash Raj films, this was not frustrating and pie -inducing like Rab Ne... it was played for comedy and it worked, because of Rani of course! She's back with a bang, she reminds me of a bubbly Neetu Singh, and she makes a quite cute couple with Shahid Kapoor who on the request of Filmi Girl i have ruled that Shahid must always where American Apparel looking V-necks or on my suggestion just wearing a towel around his neck! He looks hot, though the movie is not his and when he gets intense he gets really intense! Even Rakhi Sawant made an impact, she finally landed the YRaj movie, but as a supporting character. Though the work she's had done, makes her look like a tranny sometimes, but enough about that! Sure the movie is cheesy, and colourful and mindless but i let all that go and went for my Rani! DBH is a fun movie worth a watch simply because Rani is BACCCKKK! 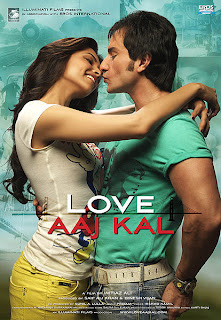 Love Aaj Kal - Though I really liked Jab We Met, I didn't go in to the cinema seeking another one in Love Aaj Kal, because they are too different. First things first, Saif the botox did work but your dancing skills in the Twist song were hilariously bad, and you tried WAAAAY too hard to catch up with your younger friends in the video. I liked this movie apart from that it seemed real though a Bollywoodized version of young love these days, though I must say I love the Love Kal part because it was cute, and the poor unbilled Giselle as Harleen was great for a first time role, and Saif in his Punjabi role was good, and his bhangra dancing was like an old uncle but fun! Now onto the Love Aaj, it was okay though I really doubt they would be on such great terms after they break up with each other, like talking on and on! But onto to Deepika, she was pretty stale in the beginning of the movie, but as it progressed there were sparks of good acting by her, though that came right at the end! Love Aaj Kal is a good timepass worth watching for Saif's wrinkle free face and funny dancing!

Chalti Ka Naam Ghadi - I loved this movie, the three Kumar brothers Ashok, Anoop, and Kishore are hilarious as 3 mechanic brothers that are taught to hate women by older bhai Ashok. It reminded me of the Marx brothers movies, and these 3 Indian Marx's also had a great flair for slapstick and witty banter. But you can't talk of this laugh riot without Madhubala, who looks just gorgeous here and her comic timing is right up there with hubby Kishore and quick cute laugh is just infectious. The movie only suffers when KN Singh, as glorious and dapper villain as he is, is forced to wear an awful wig with a 1930's style curl to it!

Do Bigha Zameen - I'm taking a film class at college and one essay topic is to cover the importance of a foreign filmaker on North America, I might do it on Bimal Roy, but this movie impacted the most because of Balraj Sahni's riveting performance as the poor rikshaw man forced to fend himself in the big city of Kolkatta. Apparently Balraj went all method on the role and drove round a rikshaw as preparation for the role, which seems to show because he looks the character and you can totally see him as a broken down. AND Filmi Baccha Rattan Kumar from Boot Polish is his cute little kid that learns boot polish off kid actor Jagdeep(not even restrained as a kid!)

Here you go, a small round up of the movies I saw this summer! Hope you like it!
Posted by Rum at 11:26 AM 4 comments: 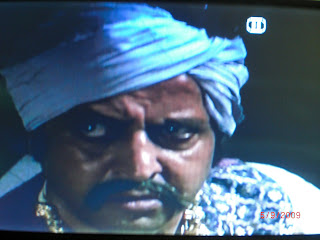 Pran, always eager to meddle in some affairs of the heart!
Yes, please chide me for being a terrible lazy blogger, I have been catching up on sooo many Hollywood movies that I almost forgot about the Masala Pradesh. But the seriousness and lack of the Shashitabh in Hollywood made me come running back.
And the genre I love quite a bit is the star crossed lovers that have had countless remakes from the 40's to the 70's, Heer Ranjha/Laila Majnu/Shiri Farhad/Sohni Mahiwal/and of course Rum Anil! I have managed to catch most of the remakes and redoes, all with a lot of masala such as unnecessary sadness that is actually quite necessary and lots of comic relief via Tuntun, and Mukri!
But this Heer Ranjha i think surpasses all the others because of this man: 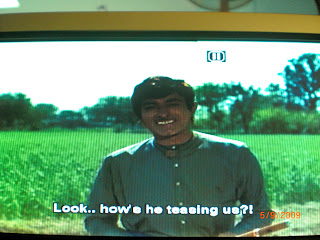 Ranjha - the eloquent Raaj Kumar
Raaj Kumar just makes this movie with THAT voice, it just so nuanced and enunciated and by god I could listen to his dialogues all day long!
Getting back to the movie, the dialogues are just a beautiful mix of Punjabi and Hindi, and most wonderful about the whole movie is that it's in verse! Soo poetic and great and its written by Shabana's father Kaifi Azmi. So we start off in Punjab where Ranjha is spoilt by his aunts played with masala cuteness by Indrani Mukherjee, Achla Sachdev, Sonia Sahni, Mumtaz Begum who have a huge haveli where aunt Kamini Kaushal gets to run around upstairs and downstairs! It kinda reminded me of the Sanjay Leela Bhansali movies where Aishwariya and his heroines run about like crazy!
Rebellious Ranjha is from Hazara and defies his aunts and goes to a wedding in Jhang where he sees Heer(Priya Rajvansh) 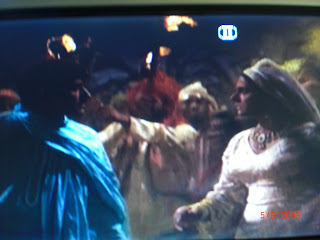 A gorgeously shot meeting!
They meet and Ranjha immediately waxes lyrical about Heer to her friend, Ranjha then becomes a "cowboy" according to the hilarious subtitles, he becomes a farm hand at Heer's estate and they stealthily meet in the night and sing the best song of the bunch "Khoya Khoya" the lighting in the movie is lovely, the blue lights sort of make me think of a Douglas Sirk film, with key colours of blue, peach, and pink, and in this movie its yellow!
On one occasion Heer runs to Ranjha's house, but this is no ordinary run it is the "Waddle RUN" its really quite funny the way Priya swishes her arms around while running through the Punjab fields! Her elbows are stuck to her side, while she flails around her arms, and in one shot as the bhangra band are approaching she almost falls because of her silly running! 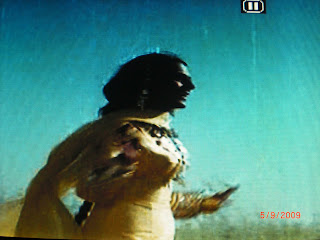 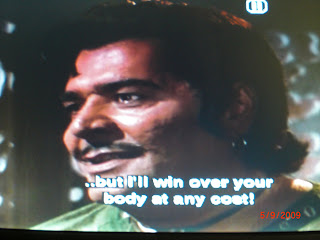 But during this ordeal she has to endure Jeevan as a bad priest that makes her say Qabool to Ajit when SHOCK she doesn't want to! What will Ranjha do? How will Heer live with that dastardly Ajit? You all know the tragic ending but this movie paces the sadness and love well and I even cried at the end!
But this movie has a warning that soo many of the great character actors show up and each of them have enough scope to make an impact, and my favorite overacting Kapoor, Prithviraj shows up as the the king of the land!
Heer Ranjha is a lovely evocative piece of film, definitely watch it for Raaj Kumar!
Posted by Rum at 9:06 PM 4 comments: