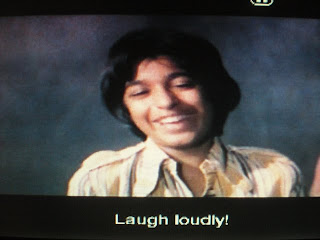 If only there was more of this!

I'm back from my wedding in Calgary, and back to the famous blog of mine!! So I decided to write about one of the most frustratingly good/timepass movie that I've watched over and over, but each time I find myself screeching "NOOOO WHY WOULD YOU DO THAT!!" and pointing my fists at the tv screeen! Muqaddar Ka Sikandar was made in 1978 during the height of Amitabh's angry young man/lover pinnacle of success and directed by one of my favorite directors Prakash Mehra. So he takes a spin at the Devdas story full of childhood sweethearts and the self-destructive tendencies of its hero Sikandar. 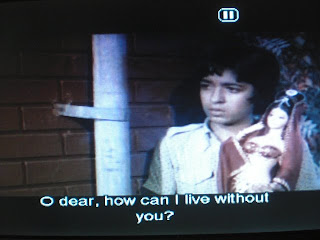 Sikandar sings O Saathi Re to the creepy doll

We meet Sikandar(Master Mayur-in another puddle-inducing role) a poor scruffy urchin that really wants to work for Masterji(Sheeram Lagoo) who hates these scruffy orphan types as one such kid took advantage of his wife's kindness and stabbed her and took off with jewelry. With this kind of backstory I'm surprised that the Masterji didn't have a Zanjeer film to himself! Moving on Sikandar is smitten with the little Memsaab of the house, who so kindly gives him a blanket in the cold and lets him eat with her at the dinner table. Then another hilarious sub-plot involves Sikandar rescuing his new-found Maa's purse, there is a chase scene where Mayur gets to pummel and kick the bad kids. He then gains a new sister and mother, and all is happy in the world till he smashes his memsaab's doll and vows to buy her a new one. Very sweet so far, till the only silly way to reach his Memsaab is to climb the drain up to her room and then ogle at a diamond necklace, this is where my head fell into my hands at the silliness! Naturally a nasty baddie called JD (Ranjeet-in a non-lecherous role!) catches him in the act, and quite naturally his maa works at the same house. And when the masterji launches into a tirade about his hatred for scruffy urchins like Sikandar, his maa comes up with this: 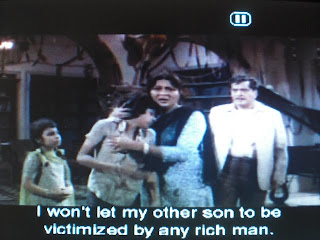 Take that all employers of scruffy urchins!

Then the problems all pile on at a rapid speed, the coughing and spluttering that Sikandar didn't notice before about his maa(Nirupa Roy) all attack her after she's finished her speech and even more sad is she dies outside the Memsaab's house! Sikandar has some hardships on the way which includes the local goon Paul (Yusuf Khan) and then in a brilliant introduction Sikandar is all grown up to be the brooding and sharaabi Devdas riding on his motorbike singing the preachy lyrics of "Rote Hue Aate Hai Sab." Sikandar is a pretty weird guy, he keeps his doll that was for his Memsaab and talks to it, though I must say i love the creepy childhood toy parts of the staple masala plot, but he is still hung up on his Memsaab who he coincidentally lives opposite too! But along the way he has to get even with Paul and his hoods, there's so much revenge that Sikandar has festering in him. But as a good yet angry young man Sikandar turns Paul into the police for smuggling goods into his district, what a good example! 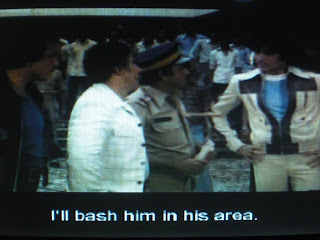 What a good citizen this well dressed angry young citizen is!

The memsaab has also grown into a spirited young lady in Raakhee, who still holds Sikandar responsible for being a stealing scruffy urchin, this is where Sikandar has sad dreams that he could climb over to her house and that she'd forgive him in an instant, alas that doesn't happen. Because we must introduce the sexy second hero Vishal(Vinod Khanna) a crime fighter by night at a seedy club and a tightly trousered lawyer in the day! I had to say the latter they're very tight and the camera seems to love a butt shot of Vinod! They quickly become friends after all this is a masala Devdas and Sikandar just has to find Vishal's mother who walks around the street with a conveniently placed photo of Vishal!!! But to add to the Devdas element Sikandar and his hilarious friend played by Ram P Sethi go to see the Pepto Bismol dressed courtesan Zohrabai, who instantly falls in love with him after he sings a typically sad refrain of her song Salaam E Ishq! 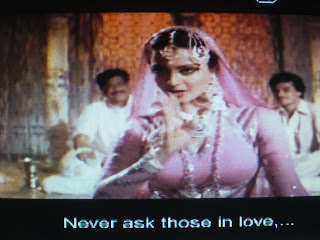 Don't ask them about wearing the same colour outfit!

But as the story goes, Sikandar pines after his memsaab while his best mate is already in the door as he must study with Masterji who is ill and was a lawyer too! But Sikandar tries to woo her in a underhanded way by paying for the guy's medicine, and along the way he still has some grievances for the shopkeeper who denied him meds for his own dying mother, got to get all the revenge along the way! Personally i wouldn't help the silly guy if he insulted my mother and me and launching into a tirade of anger about my urchin-ness! 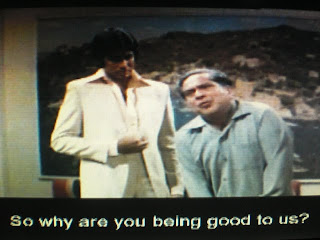 I don't know, the scripts says i HAVE to!!

On the sadness front, Sikandar has made a new enemy of Dilawar(Amjad Khan) and JD, who have joined forces to destroy the poor sharaabi, and poor Zohrabai gets told off by Vishal who says she brings badnaam to Sikandar's sister's marriage prospects! And even more sadness occurs when the most frustrating part of the movie happens. Sikandar, the stupid duffer tells Vishal to write a letter to the memsaab as Sikandar is illiterate and can't write! This sparks off a chain of convolusions that end badly and also make me cry too despite producing my ire as well! 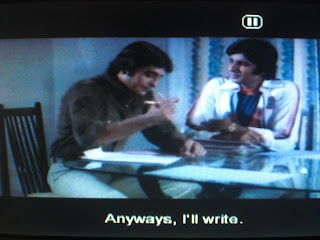 This movie twist and turns every second is full of the nourishing masala elements of lost mother, misplaced love letters, scruffy urchins, and more! It is a great yet frustrating especially the second half which could be called as we all put the "curse of the second half"