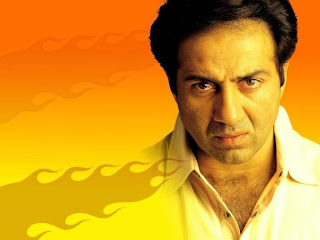 That is one pissed off Mofo, just look at the flames!
I'm really excited for this fabulous month of Deol Dhamaka, because it'll allow all of us fangirls and fanboys to appreciate the original Punjaban family: THE DEOLS! And being a Punjabi myself I couldn't pass this opportunity over at all, because I have a filmi connection to these Deol men.

My late grandfather came from the same pindh as Dharamendra, my babaji also wanted to become an actor and defied his folks and ran off to Bombay. He managed to stay with Dharam in his struggler days, but when my babaji couldn't wait it out he went back to the pindh! And I've got several uncles that can vouch for that crazy story! Me and Shashi and Dharam, so many filmi encounters!

But getting back to this fabulous month, I thought I'd start off Deol Dhamaka with a Deol puttar that I vehemently hated for a while but had a sudden change of heart with: Sunny Deol. My family is a strange one, my grandad loved the nonsense but Awesometastic Dara Singh films and I remember being scarred for life seeing his many headlocks and crotch locks. Naturally when Sunny decided to make an entrance, my family thought he was the new heir to the wrestling and wooden hero, which didn't help me at all. I had sit through all of his screeching, and closeups of those bloodshot and weird eyes of his and pummeling baddies till blood gushed everywhere. Needless to say, I hated Sunny with a passion during my 8-17 phase of life, there was just nothing to him as he wasn't cute like Bobby, he didn't possess the all roundedness of his papa, and he just stunk. 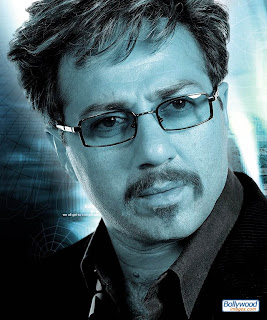 Sunny is intrigued, all he needs is a contemplative hand gesture and white beard
But as I continued to write him off and adore his brother and father. I had a reevaluation moment during Apne while he swore to 'ohh yeah i fooock youuuu' to the other boxer, he kinda won me over with his ridiculously passionate use of the f-word, and that my friends is a winner to this ribald dirty sailor mouth of mine. And the fact that he has such a seductive voice when he's not screeching and raving at baddies. So let's look at some of the pluses in his career that I've only recently discovered.

1. His Brilliant spark: Ghayal, Arjun, Betaab, Damini - these were the movies I hadn't seen for a while and they are actually gems of movies. I had seem them as a young 'un and never revisited them because of the vicious pummeling his 80's Angry Young Man did. It made me a bit squeamish, to watch him kick the shit out of Amrish Puri, who I had a new appreiciation for coz Indiana Jones! But in these movies he demonstrated that he could handle a bit of romance and action at the same time. I love in Betaab when he sings a song to Amrita Singh then the next minute he's doing a tractor stunt! Seriously looking back on these films, I will begrudgingly admit the guy CAN ACT! There I said it, he really can summon all the fury in him and that strong throat of his screeches out the best dialogues that Salim and Javed put in there! Sunny's very much an actor who has concocted a persona, aided by Salim and Javed with their brilliant dialogues and current(back then) handling of prevalent issues. The 80's were full of unemployment and I liked how Sunny's persona was voicing these concerns with corruption and job inequality albeit with a whole of dishoom dishoom and screaming. And he won all my respect for his tour-de-force performance as the drunk lawyer in Damini, a well deserved National Award win for that one, he demonstrated a hero with flaws and humility, and I loved how it was Meenakshi who made him aware of his talent and gives him his ambition back. 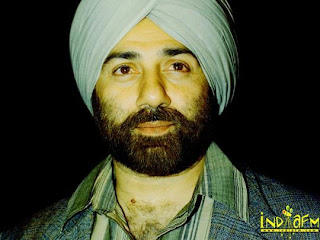 Every time he puts the pagh on, Punjabis rejoice!

2. The Dreaded Age: Gadar, Farz, Indian - Now this was age where I had to watch tons of his films as a kid in the cinema or on ZeeTv. And I'm afraid I was so right in hating these films and Sunny's OTT schtick he did in nearly all of these films. These films were right in their intention of capitalizing on Sunny's mass appeal and his forte in action films, but the story and Sunny constantly repeating the stock screaming, dishoom, speech, stomp with gal, etc.. it just fell flat on its face. The jingoistic messages and rabble rousing fear of Muslims in these films are just downright awful and Sunny just got stuck in a rut. I have to single out Gadar, because my mum was in the Punjab when this came out and Oh my gosh did they love this film and cheered on in the awful climax bit where he screeches that India is his home, when Amrish Puri(again!) tells him renounce India and embrace Pakistan. UGHHH I know I may be pummeled by Sunny lovers, but the film the biggest hit of his career was just a shrewd manipulation of a real and saddening event to capitalize on his broad appeal. That's not to say that there weren't any quiet moments where he was brilliant, he was so lovely when he tries to locate his wife and takes his son along. But this period of Sunny's career is why I never liked him in the beginning. 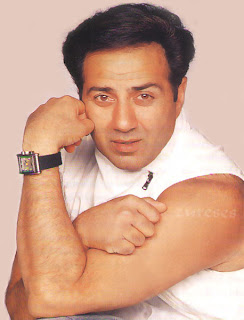 Alright dammit, he semi-cute in a way!
The Bright Spots: Border, Apne, Yamla Pagla Deewana, Heroes - Now I may be guilty of overpraising him but in Border he was a much better reuniting and glorious leader than say Tom Hanks in Saving Private Ryan. All those maudlin speeches in the Hollywood film didn't work in his favour, as Matt Damon can languish if he wants but a film like Border and Sunny's heartfelt and honest performance with it's maudlin and rousing speeches did work. I know these were 2 totally different wars, but Tom Hanks was too nice to be a forceful leader and Sunny's speech to his wife and to his men drive the point home. Initially I was put off with him screeching, and letting my poor gorgeousface Akashaye Khanna and Sir Handsome-at-the-Time Jackie Shroff languish at the end. Now that was an effortless performance where he used his trademark gestures to a beautiful degree. His later films with his family Apne, which is the lone movie that made my stone-hearted sister weep in its moments of father-son verbal offs. I really did like Sunny in this film, he seemed more relaxed after a break which did him much good as he was a lovely actor in this film and outshone a Hand-trauma Boooobbby Deol and a curmudgeonly Dharam. And did I mention how much I adored his swearing? Now one of his most underrated roles is in Heroes where he plays a wheelchair bound Major mourning his brother Boobby(I am gonna call him this all day thanks to Amaluu!). It was such a wonderful, understated and affecting performance which really made me want to watch more of his story than Salman's. His redonkulous scene where he's gotta have one fight scene even if he is a paraplegic is just awkward to watch! And onto the biggest hit of the year so far, Yamla Pagla Deewana where he was so funny and again stole the show from his bro and papa, I loved the scene where he was talking in English to the crowd. 'Don't give him yaauur wwwoootes" is the new catchphrase around my household, that hilarious way he enunciated wwwwotes is killer, intentional or not!

Sorry for the rambling but looking at some of his movies again has put into perspective, I do LIKE Sunny Deol, he is a very good actor when he's in the right project with a script that does him justice and allows him not to raise his voice for no reason(that voice just killed me in my childhood). Come back later this week for even more Booobby Deol pyar because Lawdy I adore that kid!
Posted by Rum at 12:43 PM 3 comments: