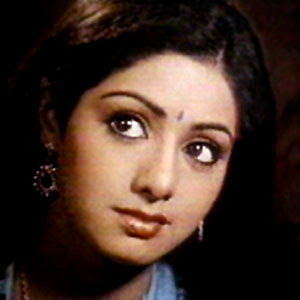 This gorgeous woman makes my day!

Sridevi is one of those wonderful actresses who's one of a kind! Though I've been out of the loop for most of the summer, I have still kept up with all these fabulous fan-worship weeks, devising one myself, but Amaluu has made this great week devoted to one of my FAVORITE actresses of the 80's and 90's! So here's a quick snippet of my absolute pyar for Sridevi!

This was a very screwball way of emitting my pyar for Sridevi out in my busy holiday in London! If you follow me on Twitter then you'd realize how much I missed a computer like a silly new generation kid would, but this is a nice post to sign on for, for a woman I just adore!