Filmi Poetry Part 2 or How I was a Lazy Lafungi 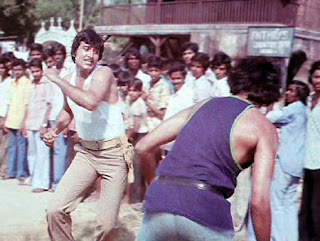 Yes bloggers unite like Vinod to kick my ass & dishoom dishoom me for not posting
Doston please royally tell me off for being a lazy lafungi! I have had many days full of essays all due the day I start them! Strangely I have being getting B's on these last minute affairs, which shows maybe I'm improving in some aspect, but as you bloggers know my breathless writing devoid of commas is what messes me up on my essays too, its either too many or too little! But I should be subjected to Shakaal from Shaan's crocodile pot, because I missed SHASHI WEEK! Nahieee! 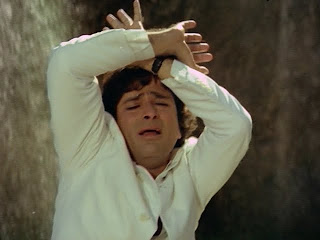 Shashi was soo upset by sin of not honouring him!
But to make up for my bad behavior I have a selection of my semi filmi poems that I've written for my Poetry writing class. I have a habit of writing waay too long, I dont think there's anything wrong with this, after all the great poets Donne, Keats, Pope, and others wrote looong poems devoted to anything. However my teacher feels I need to condense it up, thats true also so slowly my poems are getting somewhat shorter! But here they are: 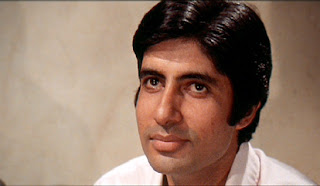 For the Love of Coolie

The board is cleaned for the big extravaganza
Vigilante Vijay is back in his starring role after that accident!
“Come see the thrills and romance of Coolie,” proclaims the poster
Nicely painted posters hung in the entrance
The auspicious incense sticks blessing the air

Now they all arrive, families and couples and loners
Bodies pushing and squished together in the ticket lineup
Shoving through that single door
Hustle and bustle at the snacks stand, food to fill the masses
Money hurled at cashiers, seven popcorns
And of course some Mazaa juice

That auditorium, built when the first talkies came in
When there were only 20 people in the audience
Now grew and grew for the people fed on films
Holding perhaps only half a crowd,
No matter we’ll sit on the aisle steps
Nudging and says “Jaa, tumhare seat se baeto!”

Shouts the usher, eyes widened by the amount of people
Piling in for that lambhu actor with the baritone voice
Ladies offering ladoos, and men installing a Ganesh on the stage
Flowers flung at the actor’s pasted face on the god
Lines winding all over the hall like snakes
To pay respect to that nation’s hero

The stage was a sea of marigolds, rupees, and annas
Ushers eyes glowing with intent
More of that money for the kids’ school fees
Finally, silence, standing to salute the tricolour
Wafting smells of pani-puri, and bhajia, smells circling around,
Meshed into a sickly pungent stink

Taxi drivers, slum dwellers, businessmen,
A cross section of the class screech
In unison, “AMITABH!!”
Automatic rising up, popcorn plopping
Down onto someone’s head
With a resounding Oye!

The hall now a crowd with gatecrashers,
Of another finished film piling in
Vendors stuck in static positions, unable to manoeuvre
Through the flesh and fat of the huddled masses
Pandemonium! The song arrives
He croons, “Accident hogaya, rabba rabba”

Popcorn let loose and flying, falling down
Like the unleashing of a biblical flood
Everyone and the uncle whooping and whistling
The ground shakes from all the jigging about
The hall holding half a town of joyful patrons

When it’s all done, the crunch of packets of food all around
The auditorium a chaotic mass of buzz and chatter
Of seeing their returned idol’s film
His wake from that coma, with their prayers and donated
Pay checks to ensure his health
If only he knew

The masses gone, a broken door to show
A destitute hall, mouths agape
Sitting on an aisle step
“Hume kaise saaf karega?” one ushers asks after a deafening silence

The stage was the sewage filled Ganges,
Sullied popcorn, spilt coke, cracked Ganesh, wrappers leading the way out
Ohh Amitabh, what have you done?

Explaination: I had seen a few pictures of how people flocked to see Coolie, as it came when Amitabh got his intestines kicked in and was in a coma for a long time, people were soo devoted they fasted, prayed for his life. I thought maybe exploring a crowded scene of people rushing to see this colossal hit, but also that good people paid money to enshrine Amitabh into their lives. They may not have known him, but his persona of Vijay has become a national institution and when he fell ill, they gave soo much devotion to a matinee idol.

Listening to that song you loved
How you pounded the floor
Just for that melodious geet
Crowded garden, with a garish tent setup
Auntyji’s gossiping at the tables,
Uncleji’s stumbling, huddled around the beer
Kids darting in and out of rooms like chased mice
Music blaring, blasting from that new stereo
Our song, at last
Running outside, anklets going chamm chamm
Yes, it was I, a grown girl
Dancing with you
Circling each other, arms curling and rising
Swinging around to that dhol
Smiles and lyrics coming to our lips
Perhaps it was a Punjabi trait of ours
To sway and pulse our hips
Billo Rani, we screeched
Arms in flight, wrists flinging
We swirled, round and round
My lengha rising in circular motion
Assorted colours smashed into one
We fell around after, still gyrating to that dhadak
I didn’t care about head banging
Neither did your screechy voice
Grimaces abound, shaking heads
Staggering about, that champagne bubbling in the belly
Violent up chuck surging towards the exit
Skipping around, till I fell over you
Plummeting down into the prize winning flower bed
Gardenias and roses decorated with a brown dahl garnish
Perhaps I forget that you only reached upto my knee

Explaination: This was a funny moment when I returned to London, it was my aunt's 20-something birthday, and my little cousin who is equally as infected by Masala and Filminess demanded that the DJ play Billo Rani from Dhan Dhana Goal! It was a mad scene as the party was just at their house and my grandparents all live next door to them, and so there was the DJ outside who had to play. Maybe I had had to much to drink or I was in a fun mood, so it was embarassingly just me and the little boy dancing like absolute nutters to this song! Everyone was looking at our crazy moves and it was fun for me, I'm that kind of mad gal who would just break out into a mad dance at a wedding or something! But after lots of twirling, my tummy ached and from the last few lines you get the picture!

Of course its not gonna mind fuck me
To see a moustachioed man sing such love
For a woman he only saw in a chaotic scene
Thanks mum for placing me there
At two years old, to occupy me
While you had to do the hoover
Thanks for the facial fuzz fetish
I’ve got from that handsome man, his pompadour hair
*
Primary school is not the place to
Ask some hapless blonde bastard
“Sprinkle some red powder in my parting”
Skipping to naniji’s house
A happy child bride
Dropping her chai on the carpet
Like my sister’s many unfortunate accidents
Explaining my pyar for him
Of course, she will tell the parents
Movies are rotting my skull
*
Visits to babaji do no good
An education of the classics
Nice films with good socialist messages
Sitting near his chair, as he waxed poetic
His favourite films
No surprise when I come home
I want to share food with that
Loitering loopy man near school
Hurling my burger at me
Yellow and red plastered on my uniform
Perhaps one for all isn’t his motto
*
In a new land of mountains and rain
The mountains despite how romantic they are
No places to bring a chiffon sari
To twirl and sing a famous song
Rolling down some snow in reckless abandon
Pneumonia attacks the happy feeling
Exiled home from the school trip with
Chattering teeth and a frost eaten body
*
Once slouchy trousers, neat plaits, comfy jumpers
Indoctrinated by the sixties and seventies films
Transforms one into a bold beautiful babe
Winged lines flying near and past my brow
Crazy prints and wild patterns adorn me
Dancing the twist at dances
Perhaps landing on the bum
After too much swigging and swinging
*
Falling in love with that jazzy kid
Life is lovelier, running with him
Through the pungent mustard fields of your mind
Let him kiss you, cheek only,
Evade a proper snog by hiding behind a narrow tree
Begrudge him when he won’t visit a rose garden
Or wear a colourful jumper and compare you
With those vibrant gardenias and sunflowers
Rather torture you through jazz tunes
Croon “kabhi kabhi mera dil meh khayal aata hai!”
Interrupt the aghast musicians
*
If love fizzles out, let me sink into
A whiskey and rum induced melancholia
Comforted with ice cream, ladoos and mini eggs
Won’t purposefully run down my stairs and screech NAHIEE!
When the jazzy tosser steps out with the stick insect
Emoting heartbreak like stilted silent film actresses
My balcony, where the world watches my melodramatic suicide attempts
*
Bollywood, I love you
Shaped me, transformed me
A loony I am to this day
Life isn’t the same without
A hope of some equally bonkers boy
Who will whisk me away
To Pancham’s tunes and twist with
Me on some magical mountaintop!

Explaination: Need I say more? This is my piece de resistance! Its partly true of my nutty fondness for all things Filmi! 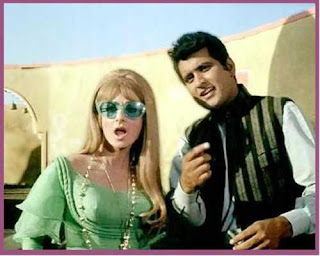 Why dost thou cover thy face?
Behind those hairy long fingers
Lies a sensible, thoughtful, brooding, Byronic Bharat
Injustice you conquered
Corruption thy fought off
Diaspora thou explored
Hearing problems thee tackled
Smile please with that witty grin
Hope and pray with funky songs
That the Desh will repair itself
Thy earnest messages shall be smacked to the audience
Thou loved mirror angles
Perhaps thou ought to meet Douglas Sirk
Maybe colours, mirrors, wobblyness, and tinting
Were from that LSD you were on
That hair puff grew with each film
To a pompadour that reminds one of Anil
Shashi made you like the fat old man in the corner
Yet thou let those smiles and curl shine
Thy generous directing allowed Amitabh
To outbrood thine with only one arm
Zeenat loved you after all
Moushumi wanted you bad
Saira changed under you
Asha appreciated your thoughts
Nanda didnt look comfy with you
Hema wanted to run her hands across your long sideburns
Manoj, puff and podginess need not deter you
Please cover thy face 320 times
One loves you all the same, sans face

Explaination: This is an old relic I dug up from my high school Creative Writing class. It was the mad transformation years when i went retro and bought tons of 60's n 70's dresses that Saira or Asha might wear, and also when i fell into my Manoj pool of Bharat emoness! Its quite terrible and perhaps i read a Keats ode when i wrote this! Thy, thine, thee, thou all misplaced but forgive a mad 16 year old at the time

So I hope you enjoy these mad and silly poems that I've written and let me know if they are quite mad or wonderful!