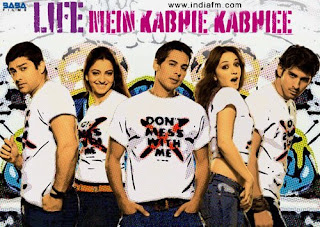 There have many movies exploring the youth culture of India, but most of these films have been about love triangles and college. But none have been so honest and harrowing of the youth in their pursuit of happiness except this. I adore this movie, its so realistic and with its share of the filmi interludes.
Its not the usual youth movies that come out its of 5 best friends Manish(Aftab) Rajeev(Dino Morea) Jai(Sammir Dattani) Mona(Nauheed Cyrusi) and Ishita(Angori Alagh) all get drunk and make a bet to see who would the most happiest out of them, they get Manish to decide in 5 years. Manish views happiness as success, Mona see happiness as fame, Ishita sees happiness as money, and Jai sees happiness as power. These parallel storylines all coincide together revealing the highs and lows in their pursuits of happiness. The movie is great in the realistic sense showing how all 5 of them compromise their beliefs and dignities and taking the easy way to success in their lives, which is so true.
The script is very fresh and moving, every character is etched out properly and very real, you can find any facet of yourself in any of these characters. Each character's compromise always moves you, though Aftab's story was a bit less engaging. The script did show the bleakness of life and the choices that they made, which made the film all the more realistic.
The acting was soo brilliant, out of the 5 characters, Dino Morea acted the best, he put in a very moving portrayal of Rajeev driven by wealth to destroy all the relations around him. Sammir Dattani was fiery and great as the political hoodlum, he seemed a bit raw in the beginning but got better in his angry scenes, Anuj Sawhney as Nauheed's boyfriend was very natural, he's a great actor he should do more movies. Nauheed Cyrusi is an effortless actor, her eyes just reveal her anguish in the casting couch scene. Anjori Alagh was very raw in the beginning but as she progressed she was better. Aftab is great actor in anything, he was very good in the light role of the movie. Koel Purie was competent in her role. The secondary characters were all good in supporting roles
Vikram Bhatt should stick to more emotional movies like these instead of doing silly thrillers. he excelled in Ankahee and Ghulam.
Life Mein Kabhie Kabhiee is a great movie, so underappreciated and underrated that it just makes me sad now. Its bleak, and unapologetic in its assessment of the youth taking the easy and compromising route in their search for happiness. Brilliant!
Posted by Rum at 12:57 PM

Hmmm... I like coming of age films, but "bleak" is usually a signal that I won't like the ending. I'll have to check out LMKK anyway. ;-)

Thank you!! That's how I felt about this film too!!! I wrote it on my blog about Underrated films in 2007 right here

I never got a chance to see this movie,will check it out if possible..
interesting post....

Willing to see this movie.When will it release?

ajnabi- i love coming of age type movies, bleak movies have sad endings, but here it is so justified

nicki- i know! this made me sad that it didn't do well, despite acclaim!

reviewer- definitely check it out, its bleak but definitely realistic

crazy- its already out