Lamhe - How Anil fell in love with my face! 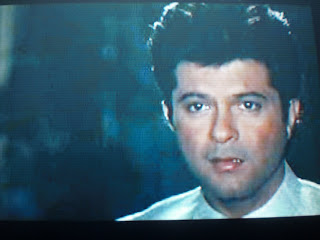 I think this week has turned into devotional Anil Kapoor week, starting with the second movie I ever watched Lamhe! Ohhhhh how loved the movie when I was a kid but now as I'm in journalism school, they teach you to be critical and inform the reader of backwass happening around. Though I want to be a movie reviewer/critic in a few years, I have to ween myself off, the automatic urge to love anything my Anil is in, which is gonna hell because he's so darn cute, and mustachioed!
Worry not there is something to complain about here, the audacity of Yash Chopra to make Anil chop his muchha(moustache) off! I'm sorry you cannot make him shave it off, what is Anil without his moustache, my mum told me when she put the movie on I started crying because he wasn't the same cute guy from 1942 A love story! Of course Anil is gorgeous but I don't know without a moustache he looks odd, but he obviously makes up for it in his acting.
I had the utter joy of finding this movie in a package with another 3 of Anil's movies, but maybe I should have bought the original because Yash Chopra explains to Karan Johar why Lamhe is his favorite movie.
Nevertheless Yash always through his directing tackles new and taboo topics like bigamy in Daag, poverty in Mashaal, affairs in Silsila, love in many others. But here he takes a huge chunk of taboo and throws it into an era where there are a ton of massive events happening 1989 - Communism fell, Berlin Wall came down, protests in China etc... and obviously he had to deal with the moral police in India. . I feel kinda sad for him as he looked really upset, that this movie bombed , during the interview. But Lamhe watching it now as a journo, I see his point and he does raise a big Hmmmm... in my head which is good.
Lamhe starts with a shockingly unmustachioed Anil as Viren and his nanny Waheeda Rehman coming back to Rajasthan from London, he's a bit shocked at India but grows to like it in his humungo haveli that he has inherited. Viren hears the "Chanak Yeh Chudiyaa" and follows the voice and its the absolutely gorgeous Sridevi as Pallavi. She looked stunning in the lenghas and suits in the movie. He naturally falls in pyar with her, they meet up but she is a few years older than him, which doesn't stop him from loving her 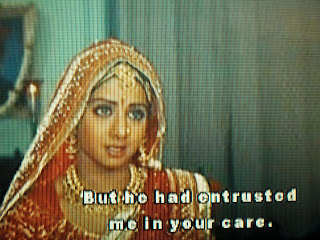 Even his nanny approves which I thought was really good, because there was no opposition and no silly drama that a love story contains. Pallavi's dad loses his haveli in some sort of court case and dies a few dramatic minutes later, not before telling Viren to look after Pallavi and make sure the haveli is taken care of.
Soon its the funeral, and in one of the best running and love scenes I've ever seen in my Bollywood watching, Viren comes earnestly spreading his arms out for a hug when Pallavi notices him, but instead she runs to another guy who is her fiance, and Anil just stands there arms outspread. This was sooo emotional for me atleast, i started crying it was just sooooo heart-wrenching, and god what bloody brilliant facial and body language Anil had in that scene. I must admit I haven't had a huuge cry over a movie since I watched Barsaat, and stupidly enough my cousin pointed out that my neck was wet from all that BARSAAT!

A new word BARSAAT CRY = a huge outpour of crying resulting from a love scene or running scene! 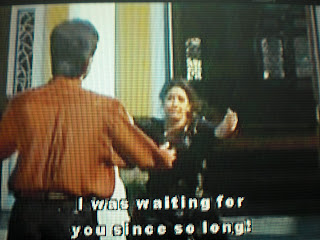 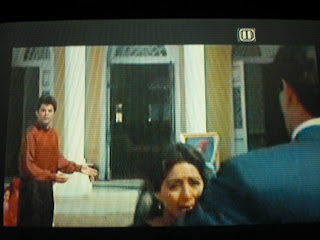 BARSAAT CRY #2= a flood unleashed!
The new guy around is Sidharth(some fugly actor who wears dreadful t-shirts) and an indulgence I didn't like here was the need for him to be a blinkin Squadron Leader Pilot, Yash give up the pilot job! Viren runs back to London heartbroken with his best friend Prem(Anupam Kher) Pallavi keeps writing Viren letters which torment him endlessly, this is till she finds out from Sidharth that he loved her. A bit of filler of their love, until the dreaded phonecall of death comes, Sid dies but Pallavi the new mother has to live a few moment on. This part of the movie was wholly unnecessarily over dramatised, Viren rushes back to utter a few more Barsaat Cry inducements. The new baby is handed over to Nanny who looks after her, Viren looks as this day only as Pallavi's death anniversary!
When she grows up Pooja(Sridevi-again) is completely in love with Viren, who only comes once a year to give a present, do Pallavi's rites, and run away fast enough. But when he sees her all grown up, he's shocked by her overly-uncanny resemblance to her maa.
Nanny and Pooja come to London for a while during this time, made me raise my hand to imaginary beard and go hmmmm. There are so many moments that he seems like Humbert Humbert from the book Lolita which I'm reading now. He feels sort of sickened that he's attracted to her,but finds it slightly redeeming that he only likes her face and not her sexually at least not obviously suggested. But the subtle moments where he sees her as Pooja is very good writing, when he sucks her finger innocently that moment is turned quite sexual by Sridevi's orgasmic looking face. And other times, he seems he seems like he is attracted to her as Pooja when he puts on the necklace, his slightly turned-on look makes it seem Lolita-esque.
Viren has a girlfriend-sort of in Anita(some equally fugly-clothed actress) that he runs to when Pooja tells him she loves him, Anita is a shrew and hates Pooja due to her resemblance of her mother who has never really left Viren's heart. A bit of filler late, Pooja finds about her appearance to her mother in a great freakout scence by Anil. She runs off to India saying she'll marry if he does first.
I'll leave it there, as this movie is really required watching, its poignant and sweet, also while raising questions about older-younger romances adding a Lolita-esque angle is sharp writing by forrmer child star Honey Irani (Daisy Irani, remember Tomato the curly haired kid? her sister)
Anil and Sridevi are superb here, Sridevi brilliant in making the audience question her relationship with those facial expressions. AND Anil, my lovely Anil he is just fantastic here as the tormented Viren, his Barsaat Cry seen made me love him even more, and thankfully he had his mush when he got older! Lamhe is an excellent forgotten classic of Yash Chopra's, a must watch!

and an indulgence I didn't like here was the need for him to be a blinkin Squadron Leader Pilot, Yash give up the pilot job!

ROTFLOL! Too true! I kinda like big age-gap romances despite the fact (or maybe due to the fact) that I've never had one. I think I'll have to see if Netflix carries this one.

I adore this movie, the songs, everything! And Sri totally shines- more like a million-watt bulb.
I think the un-moustache was to make Anil look younger- but it just makes him look- undressed somehow :)

ajnabi - this is a sweet thinking taboo-ish movie! i never find a pilot very attractive in bollywood. i like police-men, but obviously yash will never drop the damn pilot

shweta- i adore this movie too! i think anil looked like he needed a mush there, he looked naked on his face without it!

That "fugly" actor - Deepak Malhotra - was a big-time model in those days and most of my friends had BIG crushes on him. But, once he opened his mouth to utter,"Pallo" (to address Sridevi, in the movie) all his glamor faded!!! lol. He had such a bad voice and couldnt act.

I love everything about this movie,the songs the scenes and especially Sridevi...especially the scenes where Anupam kher and Sridevi embarrass Anil kapoor in London were hilarious..LOL

Bollyviewer - his voice was just ugly, he may have been slightly cute in his pilot out, but when he said pallo, i went yuck!

reviewer - those scenes were hilarious when he sings all the yash raj songs in the theme park! i laughed and snorted with laughter