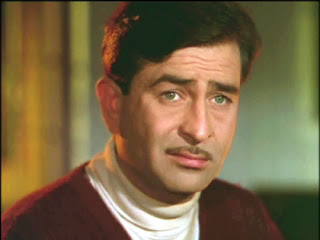 Those green eyes, that mush, that blob!
Please don't be offended by this article and my calling Raj a blobby man, its an endearing quality that he had when he got tubbier and his way of acting reflected his cuter heftier figure as I mentioned in Beth's Dulha Dulhan post. I am in love with Raj Kapoor, I could forgive any mistake he has ever made including the "ugly duckling is actually see through saree beautiful" Satyam Shivam Sundaram and the "lets be scandalous and show Mandakini's knockers in a waterfall" Ram Teri Ganga Mili. I have read his biography and his sad childhood trauma of losing his two brothers and falling out with Shammi and Shashi made me say awwwwww you're so misunderstood and most of the sadness happens in a pre-blobby Raj.
But as Raj Kapoor got blobbier his acting roles made him a nicer character, this slightly refers to Shammi also but his maybe double chin-cute-itis, but this i'm sure Memsaab could explain. Raj's tummy grew and his roles were very sympathetic and .....blobby. In a list of sweet blobbiness to sickly blobbiness I will attempt to explain.
Raj Kapoor was restrained sometimes in his pre-blobby roles in the 40's-50's but he was generally maudlin and morose or unhappy in his bad or thinking roles. But when he got blobbier he got sweeter and his roles reflected a happier side of his acting and as a person apparently. In most of his blobby roles he played different versions of the Raju the tramp character that he adapted from Charlie Chaplin. This sweetness was abundant and jumping out of the screen type happiness that he exuded, you could call him an overacter but for Raj being blobby and being Raju also made a completely good actor of him, a type of tramp that could relate to the masses.
His cuteness may be coupled with the fact that he was podgy and played his comedy roles sweetly, but with his power of blob and of the comedic Raj Kapoor could have been 500lbs and i would loved him still!
Posted by Rum at 10:47 PM

Rum, this leaves me speechless (and laughing). Blobby Raj!

Well I love Blobby Shammi in addition to handsome Shammi so I think I understand what you are saying.

Blobbiness is saaaahweet sometimes. And blobby Raj was just like a cube of sweetness - a sugar cube!

I have seen so few Raj-as-actor films that I really can't comment other than to agree with the other two that this post is an impressive work and had me wheezing with laughter as I imagined all the blobby Rajs (Rajes?).

beth - he always reminded of a disney grandfather as he got blobbier! LOL you have to watch the cycle of fluctuation in these movies, but thx I'm a joker like Raj too! Kal aur ajj kal is a nice movie by Randhir, Raj is positively blobby and cute!

Rum: what EXACTLY does blobby mean (I'm French)? For me a blob of something is not very positive...
Thanks,
yves

blobby means very portly, and bulbous! I don't wanna use fat, but its an endearing quality!