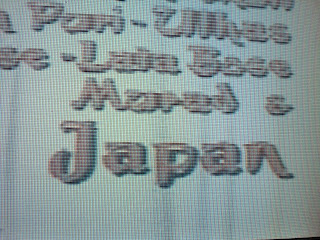 Japan needed to be credited naa?

Happy New Year, bollybloggers! As promised I needed to explain why I love this movie sooo much! I think this movie must belong in the "Masala Filmed Abroad" Masala State of my Pradesh. I first happened upon Love in Tokyo after reading Bollybob's review, which made me howl with laughter, a laughter I can hope to achieve with my posts!
Okay so we start off with Ashok(Joy Mukherjee) who is planning with his "Best Comic Sidekick ever Created" Mehmood to run out of his soon-to-be fiancé's bday party, Mehmood drives in dressed as a Pathhan, and they drive off happily. Only till the "Strictest Maa/Grandma" Lalita Pawar finds out, and sends Ashok to Japan to retrieve her grandson who is half-Japanese half-Indian due to Ashok's bhai marrying a Japanese woman! NAHHIII
Off we go to Japan, with a lovely postcard of the famous places with aerial shots that looked very pixelated on my computer, I think i had the same print as Bollybob's. Then Ashok meets Chiku(Master Shahid-almost tolerable kid) and Chiku is a complete brat that doesn't wanna go back to his 'Bharat' and in a hilarious scene Ashok chases Chiku through the many tourist spots in Tokyo. Then at a shop, he spots Asha(Asha Parekh) doing a dance, we see in her life that she's gonna be engaged to Pran, and obviously no girl loves Pran, so she runs away from her gold-digging uncle(Madan Puri) and Pran 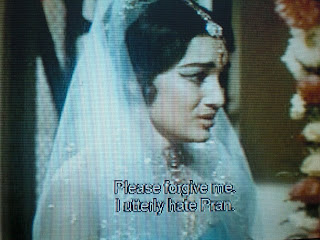 How can anyone hate Pran?
Through some very Masala content, Chiku and Asha become partners while on the run from Pran and Joy who want to find them! I have to say that I really disliked Master Shahid, he was an utter brat and his crying was terrible, he was much better in Brahmchari when he said a few lines only! But the two go to an Indian clothing shop and the owner(Dhumal) recognizes Asha and calls Pran whose set out a reward for her capture. She then dresses Chiku up as a girl, must be the reason why he's such a brat, he's acting out! She dresses up as a Sardar, and runs off, while Pran and Joy end up in the same place! 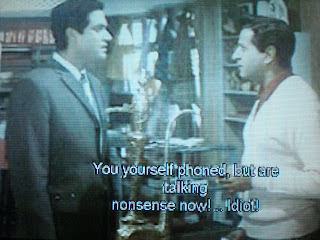 And through some more silly masala convolutions, Chiku falls out of a humungo building and manages to survive, and then Asha as a Sardar stays with them for a while. And in a very odd element Ashok wants to sleep in the same bed as the Sardar, and she runs away. And throughout the movie, Ashok tries to get very close to the Sardar which made me think is he bi? This fell out of my head, because there were so many instances where Ashok gives very bromantic hugs to Mehmood and other men. 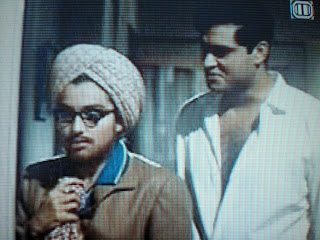 This would romantic, if Asha wasn't a boy!

Then Asha dresses up as a Japanese aunt of Chiku who wants to keep him in Japan, she charms Ashok. Her disguise isn't that great as she's obviously got some plastic attached to her eyes to make them tilted, and her accent is very English instead of Japanese, but anyway. She sings the famous Sayonara song 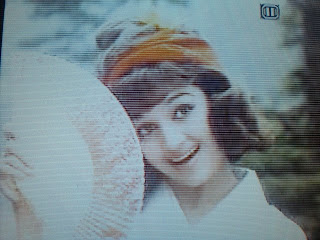 She looks so Japanese?
Ashok later pieces together that the Sardar and the aunt are Asha and she runs off again to a gorgeous temple, where he sings the lovely "Mere Shah-e-Qurban" and then everything is lovey-dovey between these two, and they sing Love in Tokyo, where they go to the nightclubs and Joy does some pole-dancing and my suspicions arose again! Then shock, they had topless dancers that were given a ton of footage! 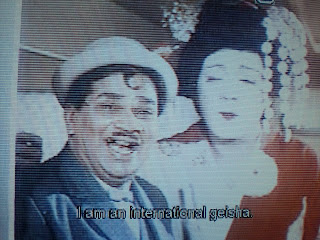 The big-headed geisha
Then Mehmood travels to Tokyo, to find his own pyar Shubha Khote, thats where the movie got better, as the convolutions in the Joy-Asha story got bigger, there was always my favorite trio DhumaL-Mehmood-Shubha to interrupt the flow. This time Mehmood dresses up as a Sadhu and tells him to got to the river to pray, and then the Japanese police come and arrest Dhumal for trying to commit suicide. Then he dresses up as a geisha, he speaks some good Japanese and tries to get Dhumal drunk, so that he won't chase after him
Later Shubha apparently becomes mute and the famous Arab doctor Mehmood saves the day, he runs off as well. And my favorite scene comes along Mehmood as the loverboy comes to see Shubha and her father agrees to marry them if he cures Shubha. Mehmood does a really funny pisstake of Raj Kapoor by using the Raju the tramp mannerisms and then singing "Bol Radha Bol." You should watch the movie alone for that! 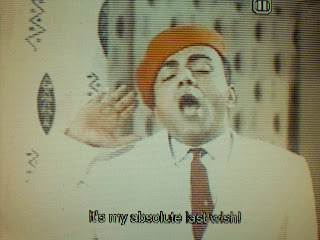 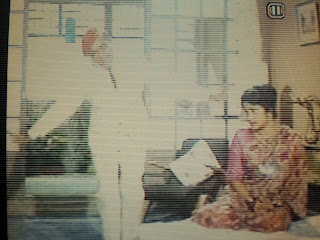 Bad print, but he does the wobbly dances that RK does 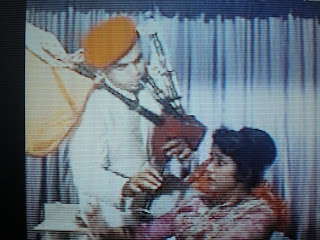 He also emphasizes the sexual meaning of the bagpipes too!

Back to the main plot with Joy-Asha-Chiku, everything seems to be all good with them, then they sing "Aaja Re Aa Zara" one of my favorites, but Rafi puts the sex in his voice and sighs with gusto and makes it one of the most Orgasmic sounding songs after "Na Na Kya Karne Lage" from Bombay 405 Miles. Joy looks lovely in the song, and his movements like catching Asha by he sari pallu and twirling around in the rain, emphasize his longing, while Asha twirls around a lot and looks at all the other couples snogging and laughs and this song is worth the watch because they really show the yearning through the dancing, body language and Rafi's quivers and breathing. 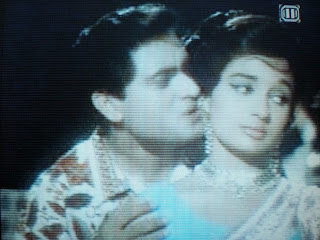 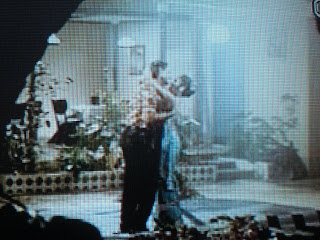 Obviously they give in to the song's meaning!

The usual convolutions come back as the nasty grandma comes to Tokyo to drag Chiku and Ashok home, she discovers Asha and in that Lalita way she becomes shrill and grates my nerves as she smacks Chiku about and shouts at Asha for corrupting her Ashok. Asha runs off for the millionth time to Hiroshima now and is tries to throw herself off a train bridge, but is stopped as pallu gets caught in a thorn! Thank goodness for those saris! She sings about her sadness, and it seems in every song, Lata and Rafi convey the emotions of the actors and Lata sings "Mujhe Tum Milgaye" with such pathos and seems close to weeping which Asha looks like in the song.
Ashok hurts himself in an accident, everyone is really sad and then Asha says to the doctor "I'll give him my eyes" and then Lalita chucks her out again.
Lalita tries to convince the other fiance to give her eyes to him while using examples from the scriptures. This always makes me angry, when a wife has to do all for her man, but i guess its the 60's movies and all girls had the curse of "Jabx2 Phool Khile" over them. And the fiance rightly turns her down, only for the doctor to say "Look how nice Asha is" 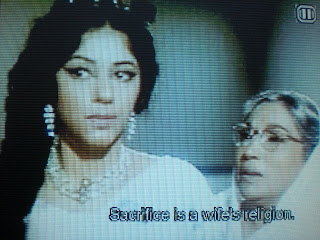 Can't we get rid of the JJPK-curse Lalita?

They have a nice engagement party till Pran turns up and reveals that Asha is engaged to him and to save Ashok from disrepute she goes with Pran, because poor bratty Chiku is tied up too. With more disguises they rescue Asha, then Pran takes her again for the final showdown.
Asha Parekh looks very elegant and beautiful in her saris, and acts well too, she always gives the right emotion when lip-syncing the songs!
Joy is a rather okay actor, but he fills the eye-candy spot here, his dialogue delivery is very rushed a bit like Dev Anand but I like it
Mehmood is hilarious here, and he looks like he's having a ton of fun with the RK spoofs, and he complements the Shubha and Dhumal. I loved his flying parts, he was given a special formula by Dhumal which made him bounce all over Tokyo and save a little kid! 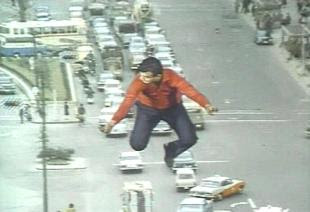 Mehmood bouncing around over the traffic
And the sexual innuendo was I'm sure was quite unintentional but how do you explain Mehmood dangling the bagpipes in a very naughty way, and then the orgasmic breathing and Joy's in the mood faces! I love innuendo in any movie, it makes me analyze the movie more, I've watched this movie around 4-6 times and a new innuendo is found!
Love in Tokyo is full of convolutions, innuendo and a hilarious Mehmood which makes it immensely watchable! 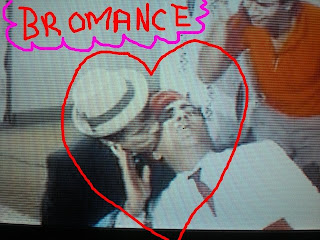 No Dhumal-Mehmood movie is without a bromantic kiss!
Posted by Rum at 12:07 PM

Awww, love the bromance final screen cap--you should use that for Valentine's! LOL The song where they're dancing all wet (well, Asha's dancing, Joy's kind of, um, bouncing or something) is super awesome, hai na?

I love love love the music from this, although I felt sort of "meh" about the film itself. Probably I need to watch it again though :)

Rum, I see your name everywhere so came back to your blog.

Thanks for reviewing this film. I have it sitting at home so I need to watch it. My mom swores to me that I've seen it when I was younger but don't remember.

One of the best movies ever! Lalita Pawar's character was so mean that I hated her for a long time after :D But the songs! and Joy! and Joy and Asha together! ooh!

pardon me while I try to swoon w/ some grace :B

I was just thinking that I wanted to see this! Now its definitely going on my list!

ajnabi - i love that song, its so coquettish and sexy!

nicki- I'm so popular! you can now watch this movie as an adult!

shweta- gushing is completely allowed! i hated lalita in anything since mr+mrs 55!

nida- this movie has to be on anyone's list to watch, it has dostana kisses and mehmood making fun of Raj Kapoor

I love the songs from this movie and even remember liking it a lot when I saw it as a kid. But now my memories are all confused because I saw this and Joy-Asha's Ziddi about the same time. As to how anybody could hate Pran - its simple, Asha knew about Joy in her future and (like me) she prefers him! :-)

bollyviewer- lol i haven't seen ziddi, which i'm sure must be good if its got joy-asha! i definitely see how joy is more lovable than pran!