Again nicking the idea from all of you, this time its Bollyviewer's fantastic post, I know Fairy GodMaa quite well, we got acquainted during my "I love Saira Banu phase" when I was 16-17-and even now, I wished for the ability to do brilliant eyeliner arches like my idol then she never appeared again even when I wished her to make my Prom a non-Carrie like day, which it was but it still sucked!
"Where were you when I needed you?" I screeched which made my already scratchy voice worse, she magically appeared and said "What do you want"
"I wanna be a Bollywood heroine that can represent the Anil Kapoor Fanclub and Masala Pradesh" 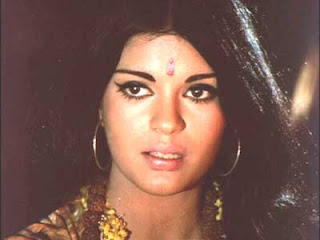 She managed to blow the lid off the heroine stereotype of being dutiful to her man, and singing a song and being a prop for the hero to use to rescue, and to further plot in convoluted ways. Zeenat was from LA and was open about her sexuality, and brought back the snog/kiss back to Bollywood in SSS!

If only I could purr "Itni jaldi naa karo, raat ka dil tootega" (Don't leave so early, the night's heart will break) from Aadmi aur Insan or "Ye Ladka Hai Allah" with such fun and vivacity, her voice has aged so well, and her famous song from Rangeela proved that she was back with a bang. I wish I had a voice like that! 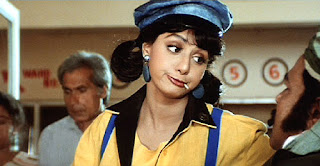 If I could pull faces like Sridevi I woulda been a contender for the world Gurning Championships! Her ability to gurn and comic timing is exceptional for example her Charlie Chaplin shtick in Mr.India was hilarious. I wanna be able project a megawatt smile while pulling the silliest of faces as well! 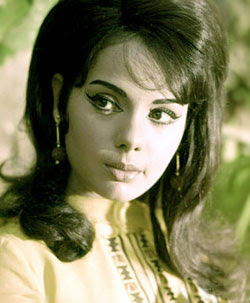 She managed to emit cute rays to any hero onscreen and make them fall for her, whether she charmed the burly Dara Singh at around 14-18, she was soo cute. I also like her "Overcoloured Eyebrows Syndrome" which made her cuter in the Dara movies! 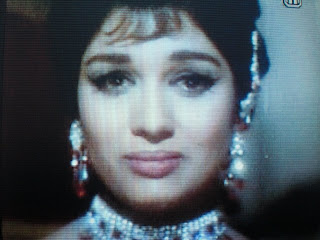 To break into Bollywood as a heroine, I need to cry like a pro, and the only woman who could cry so beautifully after Nutan was Asha, lol I'd be able to make it if I could reach her NAHHIII in Kati Patang and Caravan.

AWWWWW unfortunately I am not blessed with perfect dental structure as Madhuri, so I definitely need a smile like that which conveys such happiness and coquettish ability too! 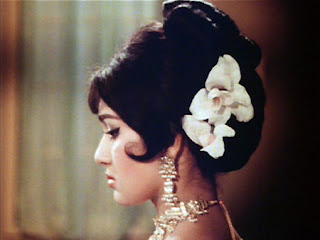 When I called the Fairy Godmaa she was unable to grant a beautiful beehive like this for my prom, it was a quite high Sadhana type with a flower too. I really liked her beehives, sure sometimes they made her look like an astronaut or an alien, but I like to think I'm a 60's & 70's syle child born in the wrong era! 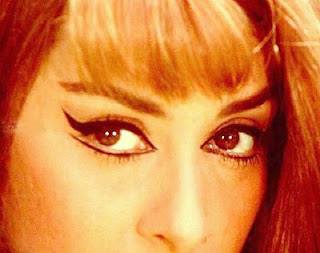 I haven't managed to achieve this yet, mine's more of her crazier styles in Purab aur Pachhim where its more glittery and higher and crazily arched!
Her style was amazingly funky and I have bought a tonnnnn of her tight kurtis that she wore in Aaddmi aur Insaan, and her crazy printed dresses that she wore in PAP! 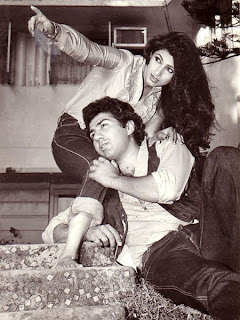 I have thick and curly hair that's more African than Punjabi, as it wild and untamable. And after watching a ton of Dimple's movies, I realized she does a tonnnn of hair flips and swishes which I love, her hair's thick and wavy and permy which I LOVE! I wish I could show an emotion of anger or irritation by just swishing my hair about!
Dimple also looks gorgeous now, she's aged beautifully and she's managed to have great roles for older women like Dil Chahta Hai and Being Cyrus 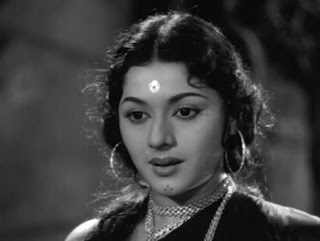 Padmini is not the regular choice for dancing, Helen is on my list also Laxmi Chhaya, but Padmini is a wondrous and almost transcendental dancer especially when she does Kathak, Bharat Natyam and other styles. I wish I could dance soo beautifully, Raj Kapoor discovered her from the Telegu and Tamil movies and brought her to Bollywood and showed off her brilliant dancing skills in "Mera Naam Joker" and "Jis Desh Mein Ganga Behti Hain" I also love her commercial movies where she does the as fabulously as Laxmi and her other mod moves!


Hope you like the new layout of the blog, and the very apt "Roti Kapada Makaan" header, sorry if it looks too much like yours Bollyviewer!

I still haven't got the eyeliner right. And I'm more than double your age. Damn!

I was born in the 60s, but wish I was born in the 40s or 50s. It must have been great to be a teenager/young woman in that period. The clothes. Though we did wear kiddie versions of bellbottom suits. Matching tops and pants.

Great post! I like Asha Bhonsle's high range songs, like Aaja Aaja Main Hoon Pyaar Tera. You are SO funny - "unfortunately I am not blessed with perfect dental structure as Madhuri..."! Madhuri is naturally blessed with beauty and good smile.

"but I like to think I'm a 60's & 70's syle child born in the wrong era!"- yep I have the same thought- I want me those platforms and earrings and orange outfits [sigh]

Cool list, Rum. I used to want Dimple's hair soooooo badly in the 80s - she appeared in the ad for some hair-soap where she flipped those gorgeous curls and I'd just flip from sheer envy! And Nutan's crying, I'd forgotten that. She did it most beautifully. Thought Nanda did the crying-with-dialogues so well, too.

PS: I love your new blog layout, too (the earlier one was great but reading white on black had my eyes hurting like hell afterwards) and yes, that Roti Kapda Aur Makaan header is soooooo appropriate. (Dont they drink in any of the frames, coz RKAM with Rum would be even cooler!)

This such a good idea I might have to steal it... :D

I make my sister do my make-up for important photo shoots and next time I'm requesting Saira Banu eyes!

Lovely list Rum, and I totally second the Sridevi comedienne ability---she could really be funny and didn't care about being goofy. Yay her!

I also second the yay your new look---the white on black was too much for my old eyes sometimes too :)

Dimple's hair - amazing. I think Sonam Kapoor in today's time is a bit like her in the hair department.

Zeenat was classy.
Sridevi - oh what can I say, if she was funny in some of her films (Mr.India,Chaalbaaz) she looked like a billion bucks in Chandni. Btw, I covered Mr.India in a comic book form at my blog and the only scene I left out was the Chaplin scene.

Good post Rum. I must admit i liked the new lay out much better. It was very difficult to read the earlier one ie the black background and white/ sometimes colour letters. I must have missed out on a lot of your earlier interesting posts due to the lay out.

Congratulations - the header is apt too!

Banno - lol bellbottom suits, i think bollywood makes it so glamorous to live in the 60-70's era. Saira must have made a spell on that eyeliner technique as only she managed to pull it off!

Bollywood Lover - thank you! Madhuri was blessed with everything nice and she can carry herself beautifully now!

Shweta - lol I sooo wish I was a 60's mod kid! orange is one colour that i can pull off so we would be perfect for then!

Bollyviewer - i love Dimple's hair though it did veer into the yuck in Janbaaz! Nanda's crying didn't appeal to me as sometimes her mascara would run and I'd make a note not to put mascara on while Bollyweepin!

Bollyviewer2 - Thanks i like this one now, still need the pink letters though! I haven't found a great pic from RKM where they drink rum but i search valiantly all the time!

memsaab - sorry if i aged your eyes! I love Sridevi's goofyness she reminds me of myself with the silly faces!

Comic Project - thanks for visiting! Zeenat was very classy, and sridevi's charlie chaplin scene made me laugh and applaud her brilliant physical comedy!

Anonymous - thanks, again sorry if i aged your eyes!

Awww, I so want Mumtaz's cuteness! Too bad I'm stuck being a non-cute gori girl. ;-)