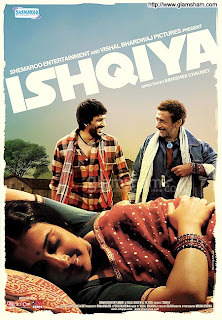 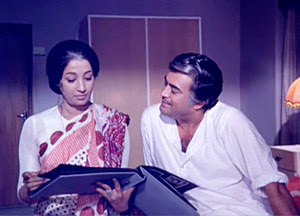 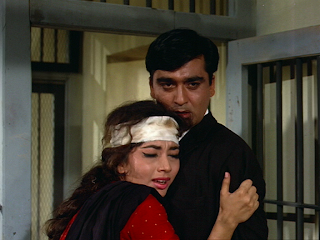 Magnificent Obsession - Yep in my Douglas Sirk extravaganza I thought I'd start with his smash hit in his subversive women's films at Universal Studios. I love Douglas Sirk, he's a director after my own heart, he objectifies Rock Hudson to the maximum water-drooling-in-a bucket effect, symbolic and gorgeous colours, mirror effects, general goodness. I will cover that all in the jumbo post of my outpouring of pyar for one of my fave directors. But back to this, I loved it of course! Rock Hudson is the local rich kid in the town, on a bad day he gets into an accident, on the other side of town another guy is dying. The doctor uses the life saver machine on Rock, and the other geezer dies, bit of stigma sadness for ungrateful Rock, he tries to buy off the widow Jane Wyman who refuses, another accident late Jane goes blind - A long lost brother film to Manmohan Desai film naa? Then naturally Rock develops a Magnificent Obsession over Jane, pays her bills, conceals his identity, and they fall in love. First let me say a big AWWWWWW to this film, it did somehow pull at my fickle heart strings, and make me swoony over Rock. Lovely colours of course lots of greens but its a good watch to see Sirk's turning point and a film which people flock back to when they start their own Douglas Sirk journey! This really is a masala film that contains blindness, mistaken identities, colourfulness!
So here are some films I've watched, hope you check them out too. Let me know if you liked them too, and watch out for a Douglas Sirk extravaganza!
Posted by Rum at 10:03 PM

Congrats for your new job! You not only get to watch all the movies you want, and write about them, you'll get paid for it? Lucky girl!

I am totally on board with your Maa - "Shrill"devi describes her to a T. :-D And Rishi's magnificent jumpers? According to Yash Chopra and Karan Johar, Shahrukh recycled some in DDLJ!

I LOVE Magnificent Obsession, too. Its so mushily romantic and Rock Hudson is gorgeous. Its just a bit hard to suspend disbelief and swallow Jane Wyman as an object of Hudson's obsession, though. :-D

Bollyviewer - thanks soo much! I'm equally chuffed to bits about the job too!

Chandni was a nice marshmallow film on a rainy day, but Sridevi's voice starts to grate at times!

Magnificent Obsession is a fave of mine forever now, simply for the closeups given to Rock. Sure Jane Wyman isn't the greatest obsession object but alas she receives some help paying the bills and some lovin' too!

Congratulations on your Job Rum, I wish you all the best on it

@ Ishqiya its on my list of films to see

@ Aandhi I loved this film too, especially the music, 'Is se mod se jaate hai' is just wonderful& 'Tere Bina zindagi se koi' is one of my fave bollywood tearjerkers, i totally loved Suchitra in this movie and Sanjeev was so handsome even with the grey hairs and all. I knew very little on the background of Indira but i still enjoyed if from the point of view of the relationships as you've noted

@ Chandni I like this film but then i also hate it, i really dislike the way Vinod was treated, you don't leave people and then just come back in, hoping to begin exactly where you left off as Rishi's character did, i really wanted Vinod to get her

@ Mera Saaya I love this film to bits as well, one of the best use of 'benefit of the doubt' scenario i've ever seen.I kept thinking who's this crazy woman, can you imagine going through what Sunil was going throuh, it'd surely do my head in

@ Magnificent Obessission I wasn't so impressed with this, i found it boring compared to his 'Imitation of life' which is one of my favourite films very melodramatic for some but its just to my taste

That's an awesome job! I'm quite chuffed for you. ;-) Of the movies n your list, I think I've only seen Chandni, and Sridevi is a favorite so of course I loved it to pieces. Even Rishi's Cosby-era sweaters couldn't make me lower my score.

Bollywooddeewana - Thanks a lot! I definitely agree with you on the Vinod treatment in Chandni. He was just chucked aside when Rishi came back, which was very annoying coz Rishi was the one who tossed Chandni aside!
I'm covering Imitation of Life in my jumbo Douglas Sirk post, that was a jumbo melodrama that i love whole heartedly! Darn that nasty Sarah Jane!

Ajnabi - thanks so much! I'm super excited bout it too! Chandni is just the epitome of a Yashraj romance i think i had a dil-squish when Rishi dropped flower petals on her before falling out of the helicopter lol!