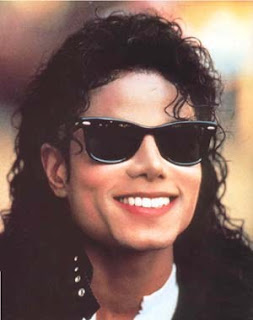 Yupp, if you didn't know already Michael Jackson has passed away, he suffered a cardiac arrest earlier this afternoon and was reported dead a few hours later, though TMZ and other sites went rampant in saying that he died. Which was awful, I mean at least wait for the FRIKKIN announcement by the family!
I was gonna post a tribute to the bromances in Bollywood, but NAA, I have some good news an article I'm writing about Bollywood and its allusions to the Mahabharat and Ramyana will get published in a local Vancouver newspaper, and this wonderful blog with all your nice comment might get featured in the GeNext section of Filfare, an honour Beth, Filmi Girl, Bollywood Fan, and others have accomplished!
But back to MJ, he did manage to ruin much of his great career in the last decade or so with the child molestation charges and wacky mad behavior, but let him not be judged in history just for those. MJ was a wonderful artist, troubled man- yes, but how can you forget Billie Jean, and Thriller and lesser known songs like You Rock My World and Human Nature.
Mj had a profound impact on Bollywood, especially during the 80's. His glorious and new and fresh choreography influenced the Saroj and Farah Khan's into giving young heroes some new moves as opposed to pelvis thrusts and running around the trees. His funk and pop sounds also made their way into the pop charts with Bappi Lahiri and Kalyanji Anandji copying the same Billie Jean beats and funkadelic guitar riffs.
His fashion sense was found on even Amitabh Bachan in the godawful Ganga Jamuna Saraswati with the line in Disco Bhangra saying "Dance dikha Michael Jackson ke" (I'll show you to dance like MJ). The glove was imitated in cheesy dance numbers, and the red Thriller jacket was worn by even my ANil!
MJ had a lasting and influential impact on Bollywood and the pop culture, he and his music will be sorely lost.
Posted by Rum at 9:59 PM

Great Post, just spoke about him here as well Michael is definitely an Icon and Bollywood really drew some inspiration from him, here is my post as well. May he rest in Peace