Slumdog Millionaire - When Anil and Danny Boyle made the BEST movie of the year! 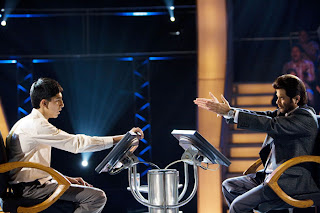 Ohhh Anil and Dev, you're great!
Bloggers I had been waiting to see this movie since the announcement in April '08, and as a dedicated and over the top lover of my ANIL I had to see this movie. And I rushed out of my economics class when the bell rang and fled to the bus, and saw it a few hours ago, all I can say now is WOOWW!
Sorry, I'll try and sound like the journalist I want to be and say that it was stirring, moving, and tense. I was overjoyed when the movie won the Audience or Top Prize at the Toronto Film Festival!
Back to the movie, it starts off with Jamal(Dev Patel) who recounts his experience on the gameshow "Who Wants To Be a Millionaire" the movie goes back and forth between the show and Jamal's experiences in life, and at the police station where they have arrested for supposedly cheating. He sits down with the Inspector(Irfan Khan) and Srinavas(Saurabh Shukla) and answers why he knows all the answers. The movie starts with the first question "Who was the
Such a sweet romance

hero of the 1973 hit Zanjeer?" Jamal remembers when Amitabh came to his slum, his brother Salim locks him in the toilet and what made me laugh a bit too loud was when Jamal jumped in the poo and ran to Amitabh and got his autograph! Jamal is then taken to an orphanage where he escapes from the dreadful (Ankur Vikal) who deforms the kids by gauging their eyes out! They lose Latika one time, Jamal loves her and rescues her a few times in the movie, another great scene is when the Bollywood element comes in again when an older Jamal sees Latika at the train station, its such a sweet moment and then it changes!

I liked that Danny Boyle didn't sugarcoat the sadness and brutality of the slum life, he adds his own gritty storytelling to the movie even if it is set in India, he makes it gritty brutal yet fairytale like as well which is soo great. And thankfully Boyle doesn't go the whole orientalism route that Merchant-Ivory went where India is simply the most diverse and colourful place and the cinematography has to capture the Indian-ness for the Western viewers, it feels intimate and not soo showy. The camera teqniques are so great and stylish and show the rapidity that Jamal's life takes on.
The only gripe I have about the movie is the M.I.A tracks in the soundtrack, unfortunately when Paper Planes came on I rolled my eyes to the back of my head, it has been played to death, but I guess the whole Hustler chorus line was meant for the growing up scenes.
Dev Patel as Jamal was excellent, with a raise of his thick eyebrows or a quiver of his lips, he just makes his acting so intimate and universal, I didn't even care that his accent wasn't as Indian as tryed and sounded a lot like my Birmingham cousins, he was just great and captured the whole lovelorn and lovesick feeling throughout the movie.
The kids Ayush Khedekar and Azharuddin Ismail who play the young versions of Jamal and Salim are such powerful actors, honestly those kids have dethroned Mayur or Rattan Kumar any day. The middle actors who played Salim and Javed were good too, making a better impression on me as street-wise urchins.
The young actresses who play Latika are gorgeous lovely actors, Freida Pinto as the older Latika was great in her first role and she is a great dancer in the very filmi number at the end.
Now to my ANIL, he was amazing nawww he was good in his supporting role, the scene where he stood out was when he had an angry freakout, shouting "Its my Fucking Show! My show!!!!" awww Anil you sound gorge when you swear! He didn't add any of the SRK or Big B to his role as his host, he wasn't a nice Regis, or a snipey Chris Tarrant from the English version, he was more calculating and nasty as the host. YAAAAY aNIL!
Irfan Khan, Saurabh Shukla, and Mahesh Manjrekar all turn in great roles! Damn why can't saying but great!!!
Lol I loved the way the subtitles were placed along the shots, making it almost like a comic, Shemaroo should try that!
Slumdog Millionaire is one of my favorite movies this year, its very Oliver Twist-esque and it should definitely be sent in for the Oscars!
Posted by Rum at 4:11 PM

It's definitely one of the best films I've seen in a long, long time (which I realize isn't saying much)...and Anil is just fab. Your favorite scene is mine too, he's just perfect in that moment. He walks the fine line between a bad bad guy you want to hate, and a charismatic not so bad guy that you kind of crush on really well.

Argh, dying to see this. Just saw that it's coming to my town to, yesss.

memsaab- in that scene, he was just soo arrogant yet soo cute when he does his ghali! LOL i felt like laughing and shouting "My anil said f***"

Bollywood Lover- they do incorporate kaun banega crorepati but they say it in english, and anil is more modeled on the english version

ppcc-That's great, tell your prezident of the Anil State how you liked it!

I cannot *wait* to see this, but it won't be coming to my town, I can guarantee. Yet another to add to the Netflix queue!

ajnabi- thats sucks that it won't come to your town,do some lobbying for it!