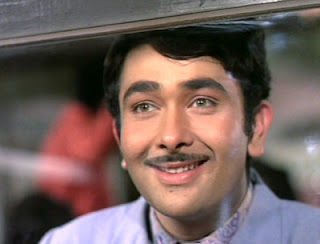 Randhir personifies the Young 'uns!
(Sorry for the lack of screen-caps as I was sold a crappy copy, that wouldn't let me capture the funkyness of the movie)

In the Kapoor Khandaan list, I said Randhir Kapoor was cute, energetic, and a bit like Shammi in his energy, I stand by that claim to date. I first saw Randhir in Jawani Diwani with Jaya Bhaduri he was fantatically dressed and charmed the pants off me!
Kal Aaj aur Kal is one of the great movies that talked about the new generation and old and how they deal with eachother that too in the 70's when the counterculture was at its top. Counterculture or rebellious movies of the 70's started with Dev Anand's crazy hippie "Hare Rama Hare Krishna" and then this movie directed by Randhir himself talking about how the new generation is so different from the old and how the current generation must balance the two. I think its very intelligent to have each Kapoor generation personify the old, middle, and young, I gleefully think to myself what a metaphysical movie! And it fits into the genuine and funkadelic Masala Pradesh states as its thoroughly enjoyable and completely funkadelic!
So we have millionaire Raj(Raj Kapoor) who is very lonely and throws parties for no reason to console his loneliness and his good friend and "I'm in any film ever made" Iftikar tells him to invite his son Rajesh(Randhir Kapoor) and his father Thakur(Prithviraj Kapoor) to come live with him for a while. Rajesh comes first and meets Meena(Babita) a gorgeous funky girl on the plane to India, what I liked here was Randhir portrayed the fast-living and quick young generation with such youthful exuberance, maybe coz he was around 21 and this was his first movie? Rajesh and Raj meet again, and have a ton of fun reconnecting, then they trick the grandad into staying mentioning in a telegram that Raj is deathly ill. All is well when they are reunited so far till Randhir and Babita have a fun house party where they encourage Raj to loosen up and have a jig, it was hilarious when he introduced Raj to his smoking and drinking friends and Raj was like "Hi, piyo bete" "Smoke karo bete" gosh if every 70's kid's dad was like that then India in the 70's would be one big party! In one of the famous scenes where Raj does a dance at the party, and Prithvi gets mega-angry at the noise, it was soo well done the loudness of the music which I think were the Troggs when it came "More/More" you could see Prithvi doing his usual angry-pink face flaring up. 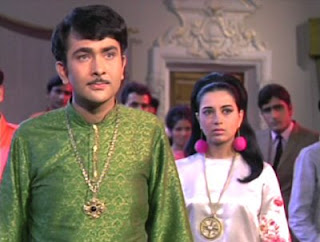 Hey Man where's the music?
And when Prithvi witnesses Raj doing some very cute blobby and dad-like dancing, he immediately switches the light on and turns the music off which is the old not able to comprehend the party lifestyle of the new! Sorry if i add a lot of meaning to the movie, Randhir has great images that make you go "Hmmm....what point is he trying to make?"
A few great clashes of young vs new is when Rajesh lets his two friends that aren't married live in his house, Rajesh shouts "Dammit its the 70's man" and Prithvi shouts "2 people allowed procreate in the same household without marraige" the actual silly subtitle said in Caps Lock! But the humungo arguement made here is Prithvi saying "Your marrying this great sitar playing girl" and Rajesh says "Naahii I wanna marry this funky kitten:" 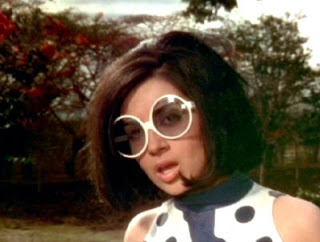 I have those sunglasses too!
Prithvi says"No way kid, I decide who you marry I'm the eldest!" and then he remembers Meena as a girl calling out to him as the gardener, honestly how does he not look like a mali with a watering can and towel on his head! Duuuhh grandad! In all this fighting Raj can't take it anymore and runs off to the hill station house of Iftikar with trusty friend David to help out. Both Son and Grandad earnestly try and look for him, Rajesh has another tiff with Grandad and says I want my share of the money to get my daddy back, while Meena's mum nastily says "Ohh look what your modernism has produced"
Son and Grandad find dad who pretends to be a drunkard and debaucher, in one shocking scene back then Rajesh walks into a room where a white woman has a quite see through bra, and then in my last screencap Raj is surrounded by a bunch of girls drinking and enjoying! 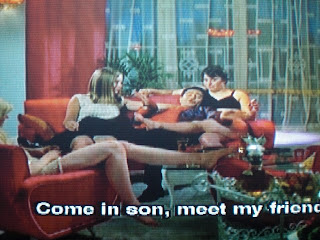 I'm only joking Son!
After both men see dad like this, they make a compromise to bring dad home by pretending to like eachother. Another funny scene is when they do their prayers Rajesh and Thakur clash on the cymbals but wink at eachother while Raj closed eyes and oblivious!
The truth unravels when they throw a party and after the nice song "Tick Tick" Thakur announces Rajesh's engagement to a girl of his choice, making Rajesh screech NAHHIIIII I love Babita! Then it comes out to Raj that they were lying, Thakur tries to justify himself and in a spectacular scene of Prithviraj going into his "I will puff up till I'm pink to look angry, and then wiggle my fingers to face while my mouth is very ugly drooling from the hamming in very Silent movie type acting" Wheww! 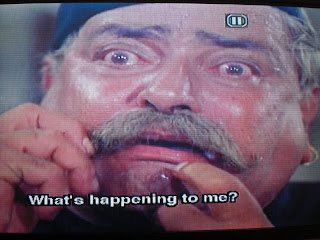 EWWW but great acting!
Thakur screeches and gags over on the floor when people stare at him with contempt for forcing this marriage on Rajesh. Everybody is remorseful and sad, Son and Dad make more compromises to appease the old generation. In a filmi sacrificial scene Rajesh says "I'll marry that puritan girl and forsake my funky sweetheart for you Granadad", I hated how Grandad was such a horrible guy to guilt-trip his son and grandson to appease his old ways! Rajesh rushes over to say the bad news to Meena, who had the best subtitle ever when explaining that she agreed that Rajesh should appease his grandad " Maybe this is the acid test for our funky, pissed off generation" I was like "You are soo deep Meena" it even made up for the fact that they were forced into agreeing with the old generation! 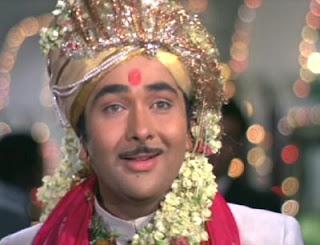 AWWW, isn't he just mustachioed and cute!
With a nice happy ending, and a blurb of a few years later with the famous dialogue "Aaj me dada bangaya, aur kal tu bhi banega" (Today I'm a grandad and tomorrow you'll be one too!" and the other great line to sum up the moving of generations "Kal me tumhe kahonge ke tum purana ho gaye" (Tomorrow I will say that you've become old too)
First things first, this is a great movie, I won't do my usual rating of any Kapoor movie "this was the greatest movie ever made" I'm 18 now and in journo school and I want to be a movie reviewer so this movie was really good!! LOL I need some better describing words! I love this movie coz its soooooo funky Babita must have a brilliant stylist the greatest sunglasses ever since Yaadon Ki Baraat.
All three Kapoors were good, for a first shot of acting and directing Randhir does a superb job of keeping someone like me entertained whether it be the sheer cuteness and energy he has or the gorgeous cinematography which added to the points and issues he was trying to make. Randhir was good director even in the silly Henna or Dharam Karam, his movies are soo technically great using fast motion shots, funky music also many of them rock'n roll like the Beatles and early version of "Baby she's got it" and "I'm your venus"
Raj Kapoor was stupendously blobby-sweetness here, he wasn't a balloon here but a rather stocky blobby and cute guy, the way he did his embarrassing jig to the Trogg's song was sooo heart-warmingly cute! I think every dad that let loose must dance like Raj does!
Kal Aaj aur Kal is a wonderfully cute and issue-raising movie, that has funky sunglasses, lots of guilt-trips, lots of big houses, and lots of funk!
Posted by Rum at 10:44 PM

I love the songs of this film especially Aap yahan aaye kis liye. I saw it years ago and the only thing that stands out is Prithviraj Kapoor's apoplectic fits of rage. Just didnt remember how apoplectic they were till your screencap reminded me!

I'm always out of breath when I'm done reading your posts.

I think I have this one but haven't watched it yet. I look forward to it now :-)

bollyviewer- the songs were great coupled with the sheer funkyness of their clothes! Glad to remind you of how theatrical Prithvi becomes in his freakout scenes!

memsaab- lol I'm giving you a great workout then! It is a great movie to watch

I think that the girl's puffball pink earrings in the first screencap should be hanging from someone's rear-view mirror. LOL

ajnabi- Lol, Babita wore some horrendous jewelry in this movie, and though her clothes were funkadelic her bracelets and other janglies resembled rubbish!