RIP Yash Chopra - Or the end of my childhood 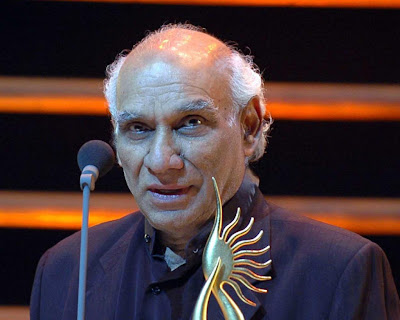 Yes, I'll admit this is a sad way to bring back the blog, but Yash Chopra and his films were such an integral part of my life as masala converter and kid. When my mum broke the news a few hours ago, I felt gutted and then the tears were unleashed. I've never really cried over a director/celeb figure. But Yash Chopra was something different. His films were part of my growing up, and haha I will say that after 1942 A Love Story, Mashaal with my darling and supremo crush Anil Kapoor, was my second film to watch as a gullible little kid. So in a way, like many Indian kids the world over, Yash Chopra for better or worse, was a staple in our lives from the trips to the cinema as a family, or those crackly songs from Kabhie Kabhie or the newer ones like Dil Toh Pagal Hai which echoed throughout the kitchens and living rooms. As he mentioned in an interview, "The way to see a film is on the big screen. When you go to see a film in the cinema theatre, it is an event." I remember seeing Dil Toh Pagal Hai in the cinema with so many of my aunts and uncles, I mean that was an event, we took up almost a row, shuffling popcorn and drinks all around. It was just a bigger ritual when it was a Yash Chopra film, as there would be so many of us. I like to think Yash Chopra was one of the connecting forces for diasporic Indian families the world over, as superficial as it may be, he made some of the best films of Indian cinema that made us feel a tiny bit closer to that concept of "home" that was left behind. When we moved to Canada, that sense of togetherness brought on by a Yashraj film was sorely missing, yet after discovering all of his wonderful early films, we just made it an event to sit round and watch a Deewaar or my well-worn dvd copy of Mashaal! Yet I know I was his biggest fan, when he released Veer Zaara on my birthday in November, and this year's Jab Tak Hai Jaan, which I will perhaps more respect for, since it was (feels weird to use past tense so suddenly) his last film. His movies are part and parcel with that perception of Bollywood as overblown, kitschy, etc but those are just the staples that make his film unlike any other. I can safely say all those Switzerland moments always resound in my memory as the most romantic and sweepingly beautiful songs that may have messed up all my expectations of love! I definitely wanted to be that gorgeous 'woman in white', which is obviously taking it too far, but hell a teenager is a teenager living in that Bolly/Holly world! Although, it's his romantic films that bounce around in my head as signs of that all-encompassing romantic love, it's his films like Deewaar, Daag,Mashaal, Trishul, Lamhe that show us a director as versatile and brilliant than we would give him credit for. Yet Bollywood romance seems a little less magical without Yash in the picture, that's not to say it won't go on without him, but they'll still be trying to catch up to that poetic/beautiful/yearning love that has come through in nearly every film he made.

I can definitely say that some of my childhood is gone with Yash Chopra's death, as he was such a cultural force in both my childhood and teenagehood. He was truly the oft-repeated title of "King of Romance" but at heart, he was one of the most original and indelible directors in Indian cinema, I will miss him forever.
Posted by Rum at 2:09 PM