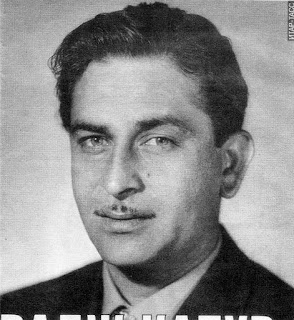 UHFFFF! This gaze is too smoldering!
Yes I've been away for sooo long, but I'm back with a bang and how! I utterly adore this new star month for any Kapoor or the Kapoor Khandaan this month. I have already written a few pieces on the film family that fascinates me the most, first outlining the men with moustaches
and championing Randhir. But my heart completely belongs to the original RK - Raj. I discovered Raj again in my teens, but I'd seen the key films whenever i visited my Communist grandfather who loved Raj Kapoor's early movies because of their good clean Socialist messages. But this month is gonna be a proper appreciation of all the RK's and other Kapoor's at an age where I'm only a tad bit less pretentious about my praise! But as usual in the 'Star and Rum' series that I've done for Sridevipalooza, Manoj Kumar, and others I have to outline why Raj is the only Kapoor for me! Raj was the catalyst to my career path and I have to explain my utter gratitude 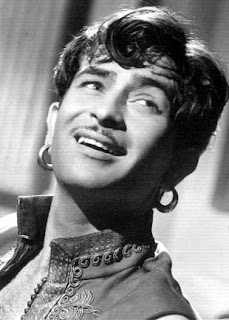 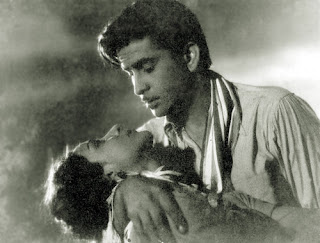 So here's to the moustached blobby but gorgeous man who captured my heart at 9 and never gave it back! I would have never discovered properly and beyond this blog that I could write eloquent film essays and follow a film nerd path! Thank you Mr Kapoor!
Posted by Rum at 4:17 PM

Wow, great piece of advocacy for the RK films.I really want to watch more oldies (like Mere Naam Joker), so I'll come back to this list for suggestions.

Dustdevil Liz - thanks so much, I do love RK a ton! Mera Naam Joker is definitely a good one, quite flawed but it's got a lot of masala dil!

Hello. So nice to see a good appreciation of Raj Kapoor. His best films were so great! And I agree that the Nargis years were his best of all, though I think that among his heroines, Padmini was the most beautiful. (And the best dancer too, of course.)

Oh, and I do love his socialist messages - what a nice contrast to the vast majority of films made in my home country, the U.S. (I grew up in Bronx NY. But I do have old Russian relatives, somewhere... I wonder if any of them ever got to use the famous Russian Padmini stamp.)

BTW, I would like to hear more about your communist grandfather, who I gather was also a Punjabi(?)... Was he a Balraj Sahni fan? And did he like Faiz Ahmed Faiz and Noor Jehan? :)

Yay for an RK advocate! BTW, since you are a such a fan, I'd love to hear your views on Aag (one of my faves) vs Satyam Shivam Sundaram.

Richard S - Thanks so much! My grandfather was Punjabi and he did attempt to be an actor and stayed with a struggling Dharamendra during the early 50's! He did love Balraj Sahni so i definitely remember seeing Garam Hava and Do Bigha Zamin at an early age.

I'd say Padmini was one of his best muses after Nargis, so totally gorgeous and spunky in Mera Naam Joker. I think the 50's films were a response to the lack of promise after Partition and Nehru's economic plans too.

Maxqnz - Got to spread some RK pyar! I did put Aag ans SSS on the Annual Bakwaas list a few years ago only because I was so upset by the messages and maybe a bad mood, but they definitely need a second looking to!

What a thrill to find another RK fan!! Thank you for alleviating my disappointment in my fellow bloggers who, one and all, seem to detest RK. *grin*

Tip o'the hat to you.