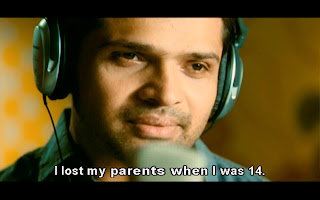 Our Lord Shameful himself, Himesh!
Let's take a few moments to thank Mr.Nasal or the newly crowned His Royal Shamefulness for making a certain flawed classic called Radio. It was this film with its lovely soundtrack that randomly shuffled onto Bunty the Ipod one night on the bus, which spawned this fabulous week! We had a brilliant run last summer with all of us reveling in a collective love for the inane and rarely admitted. Ness loves the gloriousness of Bobby Deol, Beth unleashed Pyar Karke Dekho into the already recovering citizens of Chichi week, Katherine revealed an undying pyar for all things Deol which spawned another great week and many more divulging of all things you felt were too shameful to admit you utterly adored. For me it has to be some of those very crappy films Amitabh did in the 80's like Desh Premee or even Lal Baadshah which I was dragged to as a 9 year old for my family to collectively wince and cringe and like in a shameful way! I was thinking we should star on the July 5th till the 12th or if anyone has any objections to make a whole month of sighing and finally repeating that you own Teri Meherbaniyan (Brownie Moti's star vehicle) and watched it every weekend for a month! So let me know via here or Twitter or whatever technological thing of the day if you can participate and let loose all those skeletons! 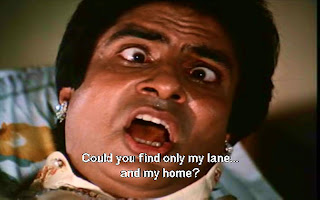 Can you resist a week full of nonsense faces like that?
Posted by Rum at 6:45 PM

heh I jumped the gun already and posted on the weekend because....errrr I think you told me the dates and for some reason it started on the 2nd in my head :) OH THE SHAME!

I'm in, I've been indulging in some (slightly) shameful filmi comfort food lately, so this will be a good chance to share the cheese-tactic fun!

Ness - I know you had to indulge early, eager miss!

Dustdevil Liz - Greaat! Lovely to have you aboard! Cheesiness in all its elements is completely welcome!

I actually rather liked Radio: Love On Air, especially the cheesy dialogue, the music and oh, Shenaz Treasurywala (now seen in Delhi Belly).

Guys, check out my review of it:
http://bollyhooha.blogspot.com/2011/05/radio-love-on-air.html

And let me know what you think of the parody of The Social Network poster I have made at the end of the review! (I'm rather proud of it!)

Does Toonpur Ka Superrhero count as a shameful classic? If so check out my review:

Shenaz is in Radio?That's almost enough to persuade me to give it a go, on mute, relying on the subs so I don't have to put up with himesh, or as I spell it हंइंमंएंशं

I love that guys face in the last pic. Wonderful.