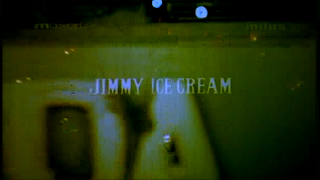 You know you've made it when you've been named as an ice cream!

Well this is a very important post because it's my 100th! And what better way to celebrate than this charming cracktastic disco and downfall masala film? Seeing as this is a hugely momentous day at the Masala Pradesh, I'm going to stretch myself and turn this review into a mock-heroic epic, like 'The Rape of The Lock' but not really, because as brilliant as I am, I am no Jonathan Swift! But as I've taken a bundle of English and writing courses, I thought why not stretch yourself with this amazing film that has 2 wonderful characters that have enough disco ennui and pain to rival other rock stars! Chalo shuroo hojaiye! 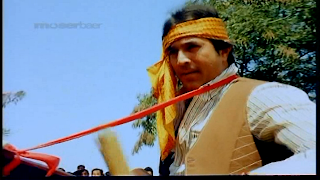 Of Jimmy's first disco dalliance and the pelvis thrusts
Of those Bappi-beats, whose synthesizers
Brought Disco destruction into the Masala Universe
Of Superstar Sam, the prodigal dancer of flailing arms
And shiny costumes, what befalls this bechara?
Ohh heavenly masala muse, I invoke thee to aid my disco tale
To uncover the myths of the creation of the Indian Disco idol
Instruct me to warn other hopeful stars of the folly of shiny clothes
Let not the fate of Superstar Sam affect others
I shall justify the ways of Disco to women/men!
Who first seduced Jimmy to the funky Bappi beats and led him to revolt?
Thy Gold chained Bappi begins our tale with melodious strums from an acoustic guitar
Young Jimmy, a poor urchin beats down on his drums for his daily roti
The awful Maa, keeps our savior attached to her hip
Her tasty roti she feeds him her attachment poison to him: 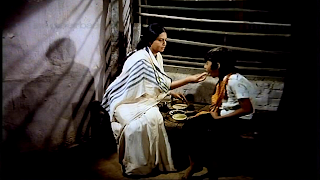 The shrew feeds him his upcoming Mummy Issues

Ohh how Jimmy dotes on the calculating shrew
Clad in pure white saris, she defiles her title as a Masala Maa
In a garden of riches, Jimmy meets his Eve
A happy song they sing, till her furious father enters
Abuses hurled at Jimmy and his maa
His mind seething with vengeance of breaking his sacred instruments
Mother dearest is thrown to jail to languish away
Ohh but what is this?
Jimmy has made sacred roti for his maa
His mind enslaved by his Maa Issues: 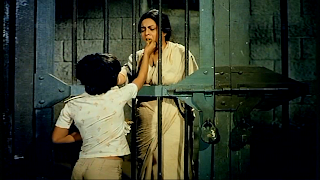 The leeching maa is released and insults are pelted her way
They flee to peaceful Goa
Metamorphosis from a humble denizen of the street
To a rather nimble-footed dark and handsome but fragile young man
Revenge bubbles in his mind
Hell hath no fury like a Mithun scorned,
Though full of mature ideas, Jimmy is held back by the shrew
Again the painful cycle repeats
Jimmy allows himself to be fed the poisonous rotis from his stage Maa: 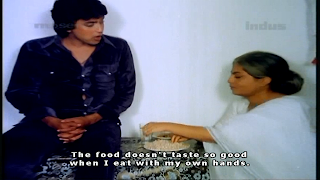 Ohh how vulnerable Disco Maa has made Jimmy!

Alas his mind has moments of unfogginess
And Jimmy realizes that his tuneful songs and his guitar
Grizzled is his conquest for his goal so much that
Jimmy starts to sharpen his guitar and vows to: 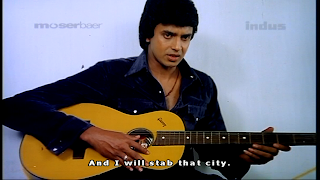 The warrior with his instrumental weapon! (I'm so phunny naa)

As Jimmy works his way up the ladder
Performing at Tuntun's wedding to a dwarf
In the Darkness lurks the pouncing and growling Sam
With shiny suits and hairbands, Superstar Sam is known to all
His dance is laughter in motion
Flailing arms, gyrating hips, unmastered pelvis thrusts
Nevertheless Superstar Sam commands the stage,
All the world beckons him to sing his song
"Aawa Awwa Koi Yahaan Aahan Naache Naache"
Yet Sam harbours a corrupted dil,
Like a young Jim Morrison, a talented but rowdy rockstar
He signals to a fan
To make love to him in the green room after: 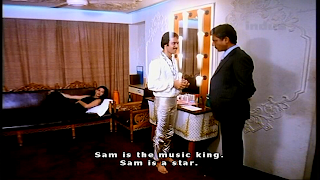 Supestar Star is a music king and refers to himself to recognize his own reverence!

Sam grows drunk on the power of adulation,
He shirks his duties, and drifts further away from his artistic soul
Ohh the music and dancing he once did
A shadow of his former self
Sam refers to himself as Sam as though he knoweth of his greatness in shiny outfits
All Thrown aside for groupies, fugly clothing, and sharaab
David Brown,a young dramatic actor appears on scene
To take his paycheque but lends some gravitas to the tale
Exasperated is he by Sam's rock n disco lifestyle
"You should know the difference between a bedroom and green room"
Unbeknownst to Superstar Sam, this is the beginning of his descent
David Brown, free of the shackles of Sam
Drives around at night and spots a sweaty dancing man
Jimmy emerges in the light!
Ohh how he twists and twirls around,
Ohh the energetic thrusts he does
Ohh the forceful head banging that mirrors that of the author of this epic on a usual day!
What a talent, David has seen
What a future this young fellow will have
He foretells that Jimmy will become an idol
Receiver of Beatles-esque adulation
Ohh the promotional items bearing the prestige of Jimmy's name: 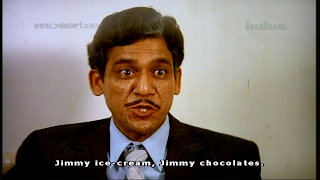 This great man gets more than his 10% of Jimmy's earnings! 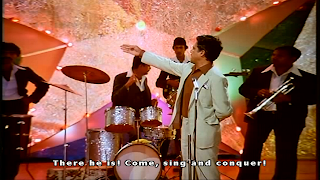 And conquer Jimmy shall! 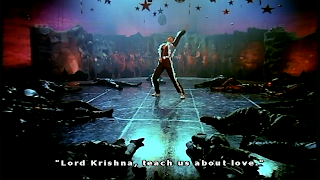 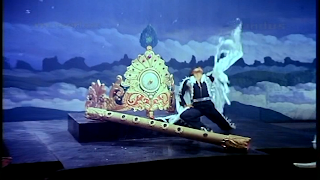 Through Jimmy's travails with fame he meets many amorous ladies!
Oooh who's is this impertinent girl throwing shoes at the great Jimmy
It is none other than his Eve, both unknown of their childhood bond
The two young children once sang a happy tune
Both filmi kids bopping heads and shaking hips in sync
Ohh these two handsome folk are simply intertwined by destiny 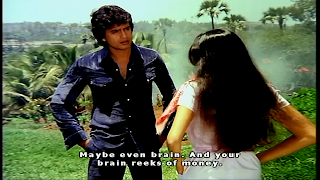 Ohh masala muse!
Is it thine that has orchestrated the similarities of these two stars
We unearth Superstar Sam screwy relations with his parent
A conniving but ultimately loving father
Ohh poor Sam, his shiny suits stripped of him
Blurry orbs become his regular vision after many a sharaabi night 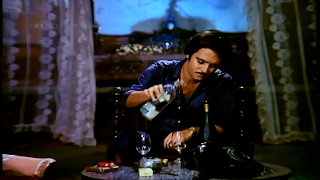 Masking his pierced ego, he guzzles his bottles of rum down

One fateful night, David Brown visits his daughter
The badly dressed hussy resides with Sam,
Comforting him on the bad days
An enraged and sozzled Sam roars and hisses at David
"How dare thou enter my drunken abode! Nikhal jao yahaan se!!"
Ohh what a tragic fate has befallen this once music king, David muses
The sharaab now controls Superstar Sam's actions
Naturally daaru is spilt, with a fair share of insults! 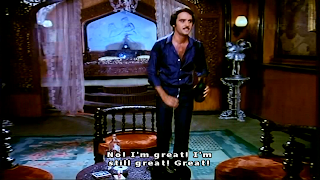 "I'm still great!" Ohh the words of so many forgotten disco stars! 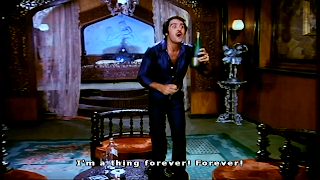 Bechaara Superstar Sam admits that he is a "thing" rather than a star! 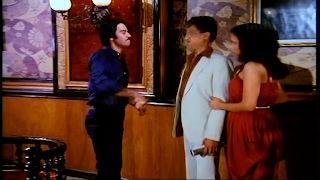 Daaru on his manager/father-in-law, Sam is enraged! 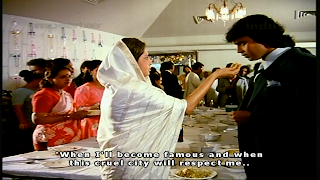 Jimmy's hyper reliance on his mother grows to gargantuan heights!

In the upper echeleons of fame, Jimmy neuroses multiply
He accepts some more chawl and dahl poison feeding from his maa
This unspeakable act is committed in public!
Nothing is mentioned of it, but such acts have dire consequences!
The great god of Masala has moved the two pawns
Onto a path that will affect both of their personal lives forever!
A seed is planted by the masala sprites sent from above 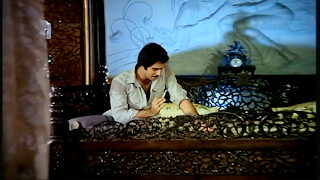 Such is the downward spiral of Superstar Sam!

Into Superstar's Sam's head during a heroin high
Sifting through the images of his mind,
Superstar Sam has an idea to kill Jimmy!
With father evilest he hires baddies
To literally turn the amp up to 11 to kill Jimmy
Unfortunately the masala sprites mix their masala dust
Into the wrong hands and the Shrewish Maa hears of the plan
In her taxi she rushes to save her son
Despite feeding him poisonous Freudian issues, Maa loves Jimmy
The Masala Lord above has written the story already
And watches as Maa gets her comeuppance by touching the #11 Guitar! 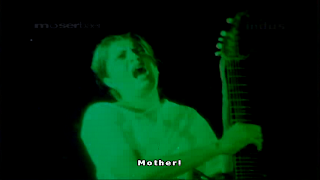 The Shrew is extinguished but not for long...

Ohh Masala Lord what have thy done?!
Mere Anarchy is loosed upon this disco world
But ohh no I must not question your convolutions my Lord
In the death of his mother, Jimmy neuroses reach the hilt
Masala sprites why hast thou powder flown to the wrong receiver!
Jimmy has turned into a recluse, 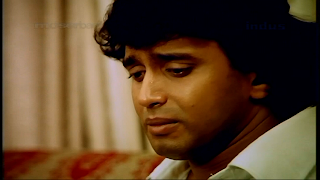 Oceans of tears grace his cheeks, never shall he walk on stage again! 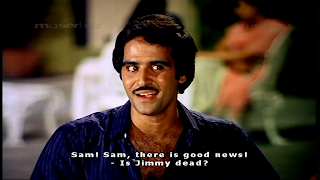 I break with the flow to say Karan Razdan is an Acting Genius!

In the depths of Disco Descent,Superstar Sam is rejoicing!
His father evilest is pleased to see his Hell spawn in a better mood
But underneath the maniacal laughter, father evilest is shocked
His prodigal Hell-spawn has gone mad with his addictions 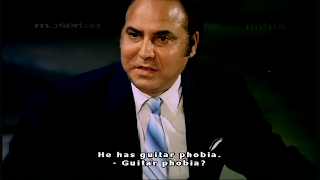 The height of Jimmy's mental issues!

Father reveals that Jimmy has become extremely fragile
The death of his mother horriblest has caused him
Extreme anguish and he cowers when seeing a guitar!

It seems that the Masala universe has been dislodged
Our two guiding lights have succumbed to madness
Ohh Masala Lord, thou hast destroyed talent that thou hast put on this earth!
Jimmy has become afraid of the very instrument he sharpened
To strike and bring the city to its knees under his stardom!
And our tragic Superstar Sam, what shall become of him?
So many lives destroyed over the power of Disco
Fie fie on Disco! Let it wither, let it die!
It perpetuates the cycle of Dard-e-disco
Bappi-beats hath destroyed the wiggly hips of our stars
The shiny costumes hath made them blind of their humble origins
Two men intertwined by their passion for Disco
Have fallen to the depths of Disco Descent trying to conquer it!
Disco ist a killer!
!THE END!

Well there you have my mock-heroic epic, I never did complete my Masala Pradesh Production of Paradise Lost, but I really didn't need to as you can see above! I hope this is as fun to read as it was for me to write up! Disco Dancer is really a freaking epic film that had me hook liner and synthesizer! I'm sure most of you must have this dvd on your shelf and we can all admit that this is the best kind of cult classic that there is! I hope you enjoy my life's crowning achievement of my 19 years! Hell who can claim they wrote a mock heroic epic that too on Disco Dancer! ERRRM MEEE! Enjoy the read and I do promise I shall try and focus on some the actual good and prestige films I have on my shelf! 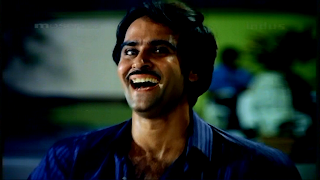 By the end of this, you'll probably be hooting along with Pagal No.1 Superstar Sam!