CUUUUUTTTTE!!!
As the youngest Bollyblogger, I have to explain why I love moustaches and facial hair, and just generally Anil Kapoor, because my dosts you need to know why I become fangirly at any review of yours featuring ANil! 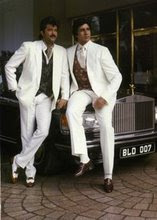 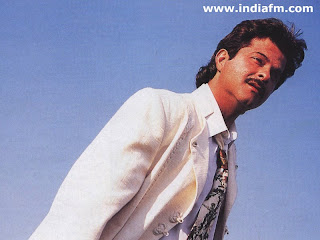 I can rock the mullet~

Bloggers slowly I will indoctrinate you all at your ages! You will swear your allegiance to the new Masala Pradesh state of the ANil Mush Masala! And I will rule as the Big Sister of you all!
This concludes the never ending series of " Star aur Rum" the most insightful series of why I love who I love with the indoctrination and pyar that I have to give, you and the faithful masalizens of the Masala Pradesh!
Posted by Rum at 11:24 PM

I have found it difficult to climb aboard the Anil train. Will not give up though, I promise!

Did he really say botox or are you kidding? :)

lol he did say botox! It was a witty answer! You must get a lift on the Anil train, its a great journey!

I love this post, and the "indoctrinate her while doing the hoover" made me laugh. LOL D'you think my kids will grow up with insatiable crushes on Juhi Chawla and Aamir?

ajnabi - I positively believe Bishop and co will have great crushes on Juhi and Aamir, also Shahid!

Went to see your blog after your visit: I like Anil too, I just saw him in Lamhe, and so far the film with him which I prefer is Calcutta Mail. What do you say?
cheers

yves - thanks for checking the blog, calcutta mail is a good showcase of his serious acting and in spurts he's allowed to be commercial and say "I want my kid!"

I love Anil's Parinda best in all his movies- he and Jackie had me weeping throughout :)