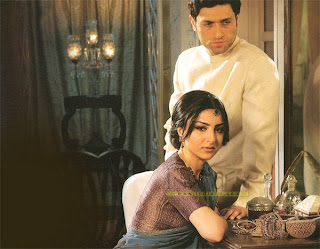 All doom and gloom for Soha/Waheeda/Meena and Shiney/Guru/Dev
A movie that makes me stroke my invisible chin beard and wonder hmmm is a very good film in my books. However KKC made me do a little more "what!" and "Yeh kya baat hai!" it was like reading the trivia book by Mihir Bose, obviously Sudhir Mishra read this or investigate into every 1950's scandal and threw into the mixing bowl that is this movie. So I thought in this review I'd liken it to the scandals that are very glaringly apparent.
The movie is very sporadic in its good moments, the love story between Nikhat and Zafar seems to be completely sexual, but the movie right from the outset talks of the sexual politics and using people for movies and etc... But did the two leads really love each other, maybe he loved her more adding to the Guru Dutt allusions abound that the movie has. What I liked about this was that it is completely brutal in showing the real life behind the golden era full of backstabbing sex and betrayals, and it shows how fleeting the movie industry is, one moment you are on top, the next -with Meena Kumari and Madhubala allusions- are gone.
The performances are brilliant, Soha though first seemed a bit too young but once she settles in she really shines, and Shiney seems to be the new art actor of these days, he embodies his Guru Dutt/crazy role very well and shines!(sorrrrry) Rajat Kapoor is very good as the selfish Prem Kumar. The supporting characters all have their good trivia etched roles, but Vinay Pathak and Sonya Jehan are great in cracking fiery roles!
The ending shot again showing the sleaze and the sex of the industry works well in conveying the movies message that behind the movies it isn't that pure.
Khoya Khoya Chand is a nicely ensemble filled movie, that works as a "Spot the Scandal" type of a movie which does make me stroke my beard and say "Vaah kya trivia hai!"
Posted by Rum at 10:41 AM

Agree with your overall thoughts on the film (here's my little review). My only complaint is that the songs were somewhat wasted. What did you think?

Also, I see Pyaasa listed among your favorites. Wrote a series of posts on it -- in case you want to check it out.

You're perfectly right in your assessment of the movie. I spent all the movie trying to figure out what scandals they were portraying, too. :-) It was such a fun trivia-hunt!

This din't disappointed me, though compared with Pyaasa and Kaagaz ke phool.

And your trivia ? Mind blowing.